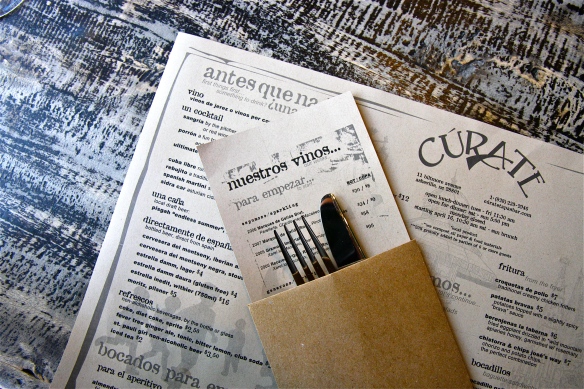 It was April 2011 and I was on the road trip of all road trips, driving through vast green landscapes in the beautiful Carolinas with like-palated friends on a united quest for great food.  We were still riding high on one of the most sensational dinners ever, one hosted by Chef Sean Brock at Husk the night before, so filling and fulfilling that we needn’t have any breakfast that morning.  But by mid afternoon hunger struck and our GPS was honed in on Asheville, North Carolina for a quick pitstop on our way to Chilhowie, Virginia. 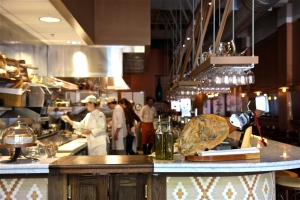 It was just our luck that a new 1 month old Spanish tapas restaurant called Cúrate was on our path, an attractive alternative to the numerous Waffle Houses and Cracker Barrels along the highway. We were excited to eat Spanish tapas by a chef who was raised in the Ferran Adrià/José Andrés family through stints at El Bulli in Spain and The Bazaar in Los Angeles, a young chef named Katie Button who opened Cúrate with her fiancé Felix Meana.  Button couldn’t have asked for a better partner in Meana who runs the beverage program and the front of house at Cúrate, and comes with a wealth of experience- as chef de rang at El Bulli for several years and most recently as the Director of Service at The Bazaar. 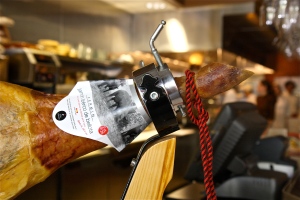 It’s no wonder then, that the minute we walked into this bright spacious restaurant in downtown Asheville we were given the warmest welcome and the most attentive service imaginable.  How it came to be that this couple left the brights lights and big cities to settle in a quaint and somewhat removed part of North Carolina (albeit with an edgy artsy vibe reminiscent of Berkeley) is a mystery to me, but they managed to create a comfortable and inviting space where these 4 out-of-towners felt right at home. 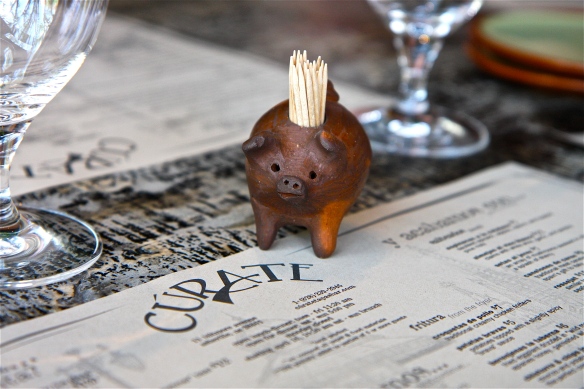 A glorious leg of Jamón Ibérico de Bellota Fermín summoned to us from the marble countertop amidst a dizzying perfume of flambéed sherry wafting from the open kitchen, and we happily obliged with an order of España’s finest, shaved, with wedges of pan con tomate. 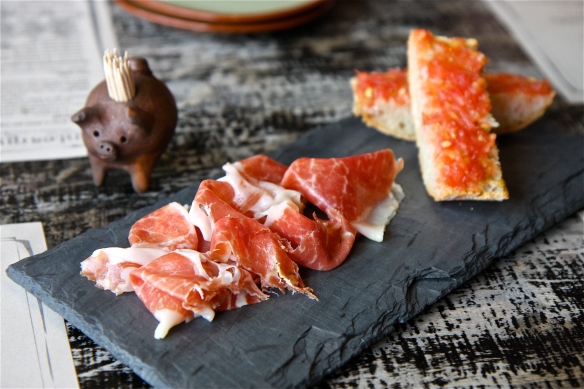 There were creamy croquetas, ensaladilla rusa, patatas bravas, garlicky gambas al ajillo and pincho moruno (lamb rubbed with Moorish spices), among numerous other staples of traditional Spanish tapas on Cúrate’s menu, and plenty of chorizo and bacalao to go around.  With nearly 40 items on their menu we had to practice restraint, a difficult thing to do, for we were on our way to a 20 course tasting dinner in a few hours.  We had ‘chistorra & chips José’s way’, spicy little chorizos wrapped in sliced potatoes and deep fried to a crisp, on the brink of being too oily yet tasty nonetheless, a popular dish served at José Andrés’ Jaleo.

Roasted red peppers, onions and eggplant drizzled with a 30 year sherry vinaigrette were crisscrossed with salty and briny Spanish anchovies in the escalavida con anchoas dish.

Tender thick stalks of Navarran white asparagus, tossed with lemon zest and a tarragon vinaigrette, were arranged as vertical towers against a backdrop of fluffy mayonnaise espuma.

Thanks to Meana there is a great selection of beverages to complement the food, from imported Spanish beers and sangria made table side, to Cavas and numerous other Catalan wines like Montsant and Priorat.  Swirl Rioja in your wine glass or spill a drop or two of panaché on your face as you attempt to drink from a glass porrón with your head tilted back.  It will all go down well with setas al jerez, mushrooms sautéed with sherry, olive oil and a sprig of thyme. 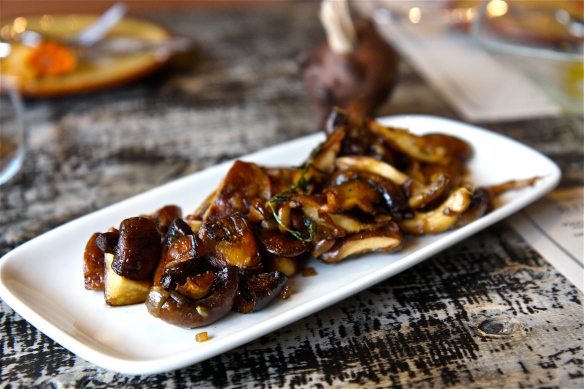 The handful of dishes that we had that day were good- certainly shy of what we’ve had and could have in Spain- but extremely promising, with a solid grasp of the essence of Spanish tapas and the beauty of its simply yet intensely flavored cuisine.  Asheville is fortunate to have this new addition to its culinary scene, and with Meana at the helm to maintain its superb level of service, it’s a Spanish oasis that I wouldn’t hesitate to recommend to anybody traveling through the Carolinas and anybody needing to ‘cure yourself’, cúrate, with a good time.

Random trivia: Did you know that the largest living organism known to man is a mushroom? There is single specimen of honey mushroom, Armillaria ostoyae, covering 3.4 square miles of land in the Blue Mountains of eastern Oregon, that has been growing for some 2,400 years- and is still growing.