Once in a while you have a meal so unique, so incredible and so special that it makes a lasting impression on your palate and makes you rethink what good food is.   When food tastes wonderful, and flavors are effortlessly delicious, we recalibrate our standards by which we measure culinary greatness.  On a recent trip to Amsterdam, I visited Restaurant De Kas in the hopes of having such a life changing experience.  Arguably the most famous restaurant in Amsterdam, there was not a soul in the city who did not know of De Kas, and for 10 years this restaurant has been a benchmark of haute Dutch cuisine. Locals were impressed that I was going there for dinner, and tourists were envious of my reservation at this reclaimed and beautifully reconstructed greenhouse that used to belong to Amsterdam’s Municipal Nursery.  The 8 meter high glass greenhouse, which dates back to 1926, was rescued by Michelin starred chef Gert Jan Hageman in 2001 and converted into a restaurant with an adjacent nursery and gardens.

Located inside the Frankendael Park, the greenhouse stands out as a majestic building with a tall chimney as its landmark.  No doubt the views through the tall glass windows are stunning during the day, but on a recent autumn evening as I approached De Kas through the light mist, the warm orange glow of the restaurant against a striking backdrop of indigo blue took my breath away.

De Kas’ appeal is haute cuisine using locally grown and harvested vegetables, herbs and edible flowers, which are tended to by Gert Jan Hageman in the greenhouse and in several gardens on and close to the restaurant premises.  Additional produce comes from local farmers, and meat and seafood are locally sourced as well.  The greenhouse is the first room that one sees past the front entrance, before entering into the awe-inspiring dining room with floor to ceiling glass and beautifully lit trees interspersed between tables.  While the room is spacious, every seat has a clear view of the semi-open kitchen. 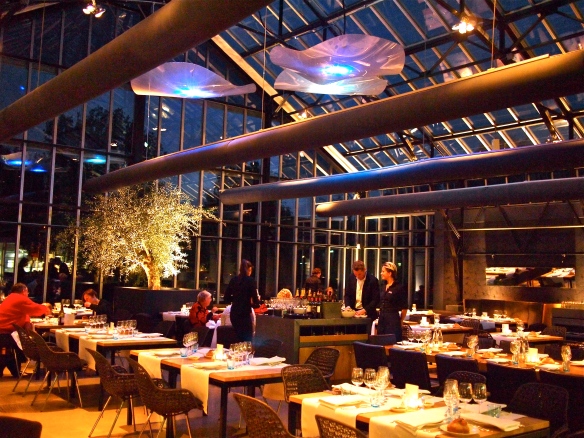 Both lunch and dinner are prix-fixe menus, lunch with 4 courses for 37.50 Euros, and dinner with 5 courses for 49.50 Euros.  A small 4-person chef’s table inside the kitchen offers a 10 course meal for 125 Euros and an up-close and personal encounter in the heart of the action.  With such a compelling story, a rich history, a stellar reputation and an intriguing cooking statement, I was sure that I was in for a unique experience that was going to change my perception of food.  Little did I know that I was in for a uniquely disappointing experience. 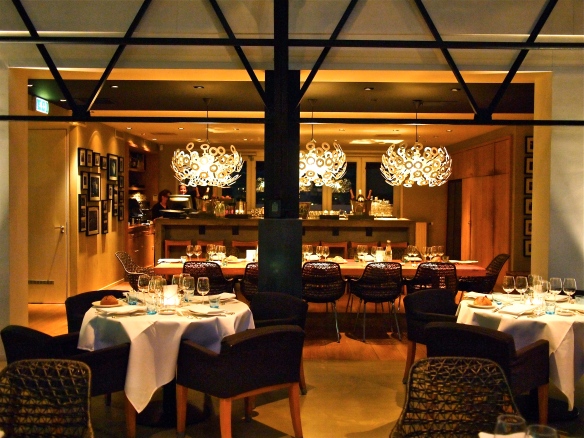 It started with a glass of champagne, chilled, bubbly and golden yellow.  What a clever idea to float basil flowers in champagne- nobody has ever done that, I thought, but the first gulp sent a caustic bitterness that stung the surface of my tongue.  It didn’t seem right, and the champagne stopped tasting good, but I passed it off as my lack of ability to appreciate the combination.

Starters of plump green olives and bitter radishes marinated in herbs and mustard seeds were good, but the basil oil for dipping their bread had the same unpleasant bitterness of the flowers in the champagne.  The basil oil that I make at home never tastes this acrid, I silently thought to myself, but I am not a professional chef and surely I must be wrong.

Pan seared quail, cold and underseasoned, was served with thick fennel shavings, practically raw brussels sprouts, edible flowers, parsley and pine nuts.  The curry flavor on the quail disagreed with the bitterness of the flowers, and I didn’t quite understand whether the raw roughage was intended for texture or flavor, as it did little to prove more than its function for color.  It was around this time that I noticed my dining partner sharing the same confused facial expressions, but we both smiled in silence for fear of admitting that it was our palates in question, and not the food.

Tender red beets and gorgeous yellow carrots were generously coated with a sweet vanilla sauce, a seemingly logical combination of sweet on sweet, but tossed with cold clams and cockles, it took a hairpin curve in the wrong direction.  Crispy carrot chips, random leaves of spinach and bitter edible flowers were thrown into the mix, with the vanilla cream sauce the only seasoning on the plate to feebly attempt to bring everything together.  A subtle squint of disapproval shot across the table, initiating a silent conversation between the two of us- is it, perhaps, the food? 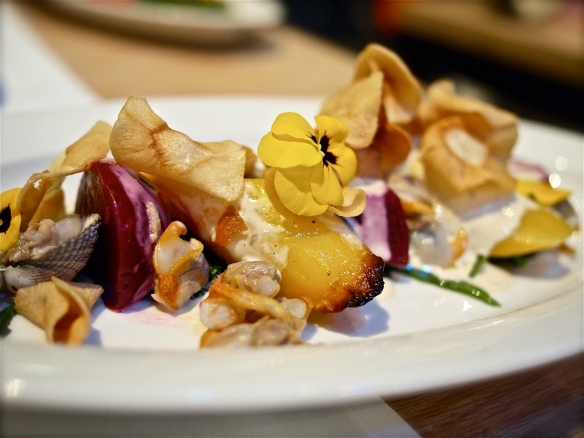 A deep fried chunk of celeriac root adorned with yellow edible flowers unabashedly sat on a raucous carpet of coarsely chopped gherkins mixed with mustard seeds, soggy apple salad and whole almonds.  Breaded roots with chopped pickles at a fine dining restaurant- this concept finally broke our restrained silence, and like an avalanche, our concerns, complaints and disdain came pouring out in an uncensored confessional.  It is De Kas, it’s not our palates.  It was the first time in my life that I ever struggled with a palate identity crisis, and the weight of vacillating self-doubt nearly crushed my confidence.

Risotto stuffed in a roasted miniature pumpkin resembled nothing of a risotto, but rather soggy Asian rice overcooked with water, the underseasoned pumpkin, zucchini, endive and chanterelles contributing little flavor to the bland concoction.  Veal stew lacked the gusto, depth and heartiness of braised meat, and I found myself paralyzed with disappointment and confusion at what tasted like fancy cafeteria food, at best.

Even the farm greens in the salad De Kas, dressed with an uninspiring vinaigrette dressing, were lackluster and irredeemable. 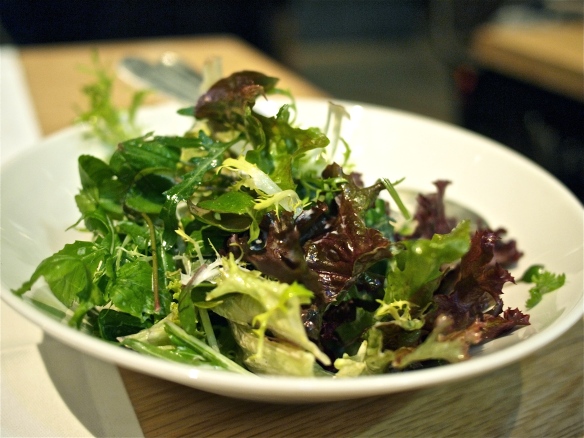 Lemon panna cotta topped with pomegranate seeds, melon and an aggressive basil ice cream finally convinced us that it wasn’t just a bad night at De Kas- it was their style of cuisine. 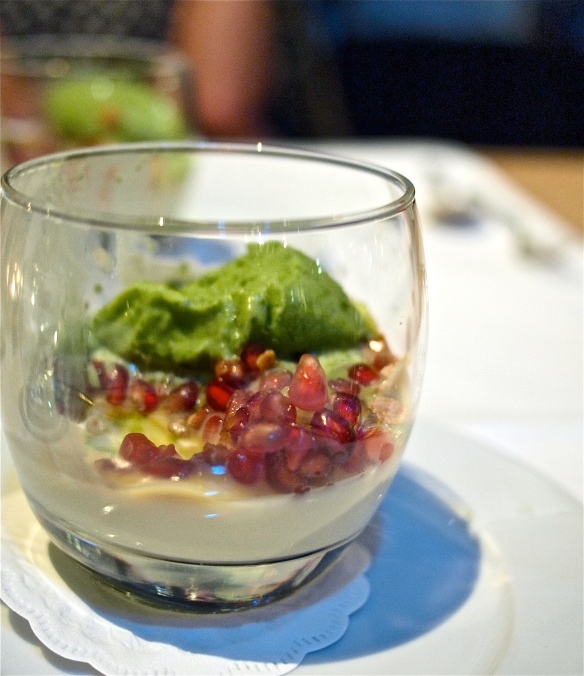 Despite my heightened expectations and hopes for an exceptional experience at De Kas, I found the dinner to be generally bland, and the flavor combinations to be both odd and off.  Unable to force ourselves to eat more than 2 bites of each dish, our server and the manager approached us at the end of our meal, asking what was wrong.  While my dining partner could not help but be blunt, stating that the meal was awful, I tried to follow with compliments on the beauty of the dining room and the attentiveness of our staff before admitting that the food was not palatable.

This was met with disapproval of our opinions and criticism of our palates, as they tried to explain how the restaurant philosophy was to use as little seasoning as possible to highlight the natural inherent flavors of the vegetables.  Most restaurants in America are used to oversalting and overdressing vegetables, which is why you don’t like our food, they argued, as I held back my comments in order to gracefully end the dispute, all the while flipping through gustatory flashbacks of sweet succulent vegetables from the Santa Monica Farmers Market and the delicate beauty of minimally seasoned Kyoto turnips.  I had come full circle by the end of the dinner, regaining complete confidence in my palate.

‘Once in a while you have a meal so unique, so incredible and so special that it makes a lasting impression on your palate and makes you rethink what good food is…’  This experience at De Kas did just that, only in a way that I never expected.

Random trivia: Did you know that the largest pumpkin ever grown weighed 1,140 pounds?