One of my favorite winter delicacies of all times, is this…. 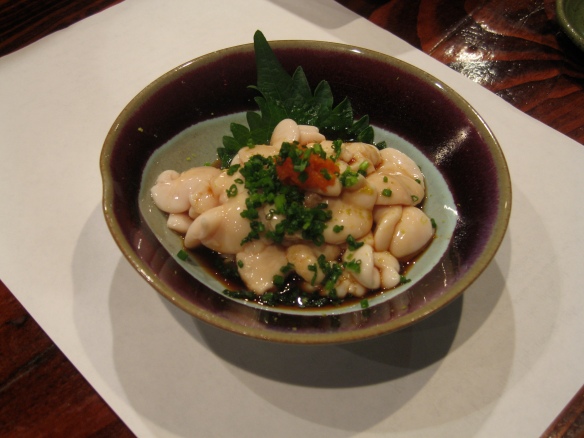 When December comes around, it’s shirako season for me. Time to savor some harvested milt. Harvested what? Milt, sperm sac, fish seminal fluid…you know, ‘that’ part. No, not ‘THAT’ part, but ‘that’ part. It’s called shirako in Japanese, which literally translates to ‘white child(ren)’. Shirako can come from either cod or puffer fish (fugu), but most of the time it will be from cod.

Especially in the winter during high season, when removed in its entirety from the cod fish, shirako looks like a huge piece of melting human brain. It’s soft, squishy, white, hard to get a hold of, and slippery. But when cooked, it becomes slightly more firm around the membranes, and the individual sections blossom into chrysanthemum flower buds.

The most traditional dish is shirako-ponzu, where it is quickly heated through in hot or boiling water, then served in a ponzu sauce with all of the usual condiments of chopped green onions and grated daikon radish. It just melts in your mouth like smooth warm creamy butter. It’s sweet and light, and its taste is very subtle and delicate, with just enough fishiness to know that it is not made from dairy. It can also be sauteed with butter, or in a hot pot. I also enjoy this as a tempura, lightly dipped in salt seasoned with pickled plum (ume-shio).

I love initiating men into this ritual. Of course, I don’t initially tell them what it is, but just have them try it. So far, about 90% of the guys who have tried this said it was delicious, and went for a second or third bite. That’s when I finally reveal the truth. First comes the scowl. Then the wide eyes and dilated pupils. Then the quick look at the sushi chef to get confirmation (to which the chef responds with a smile). Then the quick look at me to get another confirmation (to which I respond with a slow silent nod). Then the quick look down at his pants (not sure what this step is trying to accomplish. Sympathy?) Then the tensing of the shoulder muscles as he cautiously lays down his chopsticks back onto the counter with a nervous laugh. That’s when I put my hand on his shoulder and tell him that everything is going to be okay. And as he stares into the distance looking defeated and puzzled, I quickly finish the dish to its last heavenly bite. 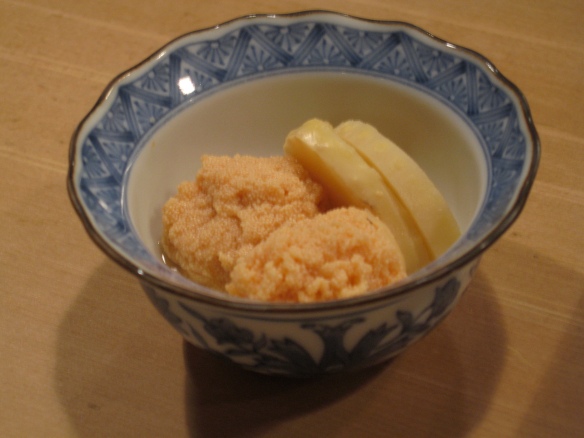 Tarako (which means ‘cod child’ in Japanese) can be eaten all year round and is usually salted for preservation. Many times one may see mentaiko, which is salted spicy cod roe sack marinated with red peppers. I personally prefer the purist tarako without the spices. The most common Japanese way of eating it is to slice it and eat it with white rice, while more popular modern versions involve removing all of the eggs from the roe sack and pasting it on buttered toast, or mixing it with pasta garnished with chopped shiso leaves.

Random trivia:  Did you know that there are 5 calories in a teaspoon of semen?