Culver City is SO last year.  Downtown LA is the hot culinary mecca of the moment in Los Angeles, as new bars and restaurants are opening just as quickly as the Ritz Carlton tower is going up.  From Liberty Grill to Wurstkuche, Drago Centro to Bottega 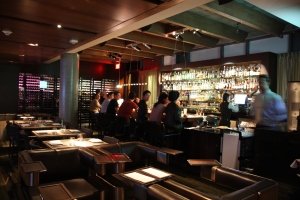 Louie, there are more reasons to flock to downtown LA now.  Even after the exponential surge of kitchy downtown lofts and swank hotel bars a few years ago, it still seemed like downtown was dead; there never seemed to be a good enough reason to congregate there.  After events at the Staples Center or the Disney concert hall, my friends and I would opt to return to the west side for dinner and drinks.  Now Angelenos are willingly drudging through horrible freeway traffic and paying expensive parking fees in order to indulge in the latest dining adventures there.

The most notable on the scene is Rivera, a Latin-themed restaurant recently opened by chef John Rivera Sedlar.  The impressive menu incorporates Latin flavors from his extensive travels through South America, Mexico and Spain, southwestern comfort from his upbringing in New Mexico, and French techniques from his culinary training.  The large beautiful space is split into many sections, each with a unique theme and design.

A minimalist square communal table stands next to a sushi counter-esque ceviche bar that looks out onto the busy open kitchen.  On the other end is the elegant and dark Sangre room, illuminated in eerie shades of blood red from the large chandelier above and golden yellow through the backdrop of tequila bottles.  Flanked in the middle are specially made tequila tasting chairs, more dining tables with gorgeous leather banquettes, and the classy tequila bar.  They even have outdoor counter seating where you can get an unobstructed view of the majestically lit LA Live complex.  The contemporary space is sexy, dark and mysterious.

We started with the patates xips, Kennebec potato chips with caviar, microgreens and chipotle lime cream.  It was a nice starter to complement our Brut champagne, although one thing I’ve learned about caviar is that ‘more is better’- another heap of caviar would have elevated this dish from great to perfect.

Tortillas florales, housemade Nixtamal tortillas with ‘Indian butter’.  Chef Sedlar explained to us that the maize was freshly ground in the kitchen and handmade the traditional way ‘by our señoras’.  With chives and edible flowers pressed into each warm piece, these adorable earthy tortillas with the smooth and creamy avocado butter brought me one step closer to understanding and appreciating the culinary history of the Americas. 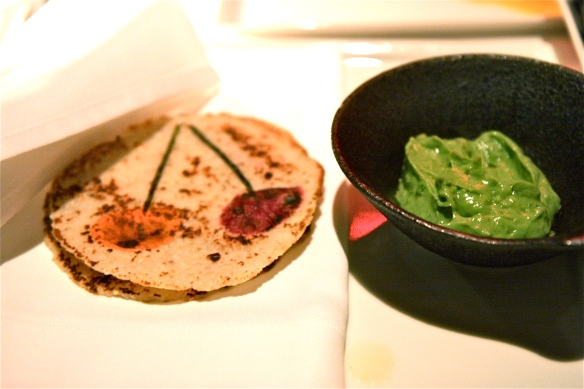 Caballito de sopas dobles– 2 Latin soups with different flavors and different temperatures.  A layer of warm lamb velouté with black beans was layered on top of cold refreshing potato vichyssoise.  It was an interesting and inventive concept, and I especially loved the creaminess and flavor of the potato soup.  Although the lamb velouté tasted more like a sauce than a soup at first, once the 2 soups came together inside my mouth, I realized the delicious intention behind this dish.

At this time the sommelier opened an absolutely delicious bottle of 2006 Alto Moncayo Garnacha, Campo de Borja Spanish wine for us.  It was a good decision to trust him with the wine selection, as their wine list was overwhelmingly extensive.  It was an impressive collection that had selections from Portugal, Spain, Argentina, Chile and Uruguay, and an even more amazing selection of sherries, marsalas and ports.  The Alto Moncayo was one of the best Spanish wines that I have had in a long time.  After my meal at Rivera, I hunted it down at the Woodland Hills Wine Company and bought a half dozen for myself.

Chile pasilla relleno– pickled pasilla chile with burrata cheese, served chilled.  The pasilla chile was marinated for a day in vinegar, salt and sugar, and had a deep smokey flavor with an acid kick.  As Chef Sedlar proudly presented the dish to us, he explained that this was his interpretation of the classic chile relleno.  “People normally think of chile relleno as a big green chile with lots of goopy melted cheese.  You’ll find that this one has an intense flavor” he said, with kind gentle eyes and a friendly smile.  “It’s also a dish with a political statement”, he added with a wink. Indeed, stenciled above the pasilla in brick red chile powder was that street sign that most of us have seen near the Mexican border on the 5 South.

Choros al Vapor– mussels with aji amarillo-pisco broth.  Aji amarillos are yellow Peruvian chiles, and pisco is a South American grape liquor.  This dish to me was a bit too mellow and almost fruity and sweet, lacking in robustness and depth. 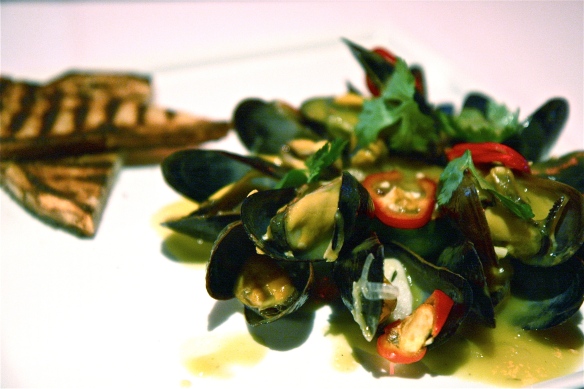 Jamón Ibérico de Bellota pata negra– of course, how can we not order this?  An absolute joy, as always, to have this succulent flavorful cut of the finest ham in the world.  Paired with the Alto Moncayo wine, I would have been happy just eating this all evening. 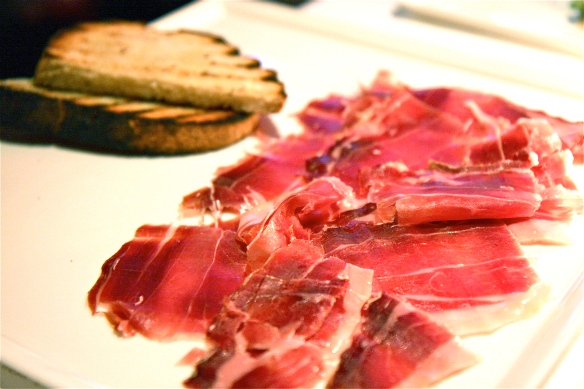 Mole Kurobuta pork chop- an intense mole sauce coating a juicy succulent kurobuta pork chop.  This dark and rich mole sauce was absolutely exquisite.  It was a perfect blend of smokey chile flavors with the slight bitterness of cacao.  I usually don’t like dark mole sauces as they tend to be too sweet for my taste, but this one was polished and flawless. 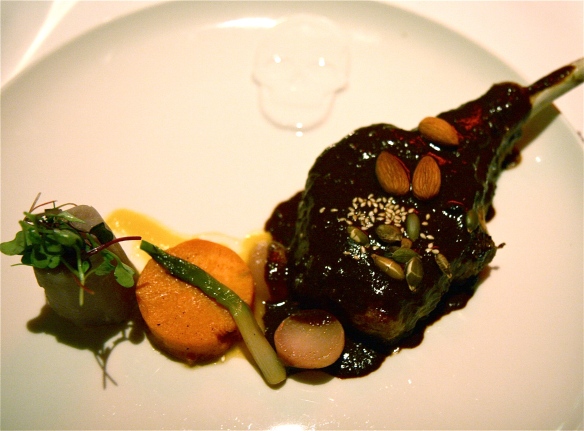 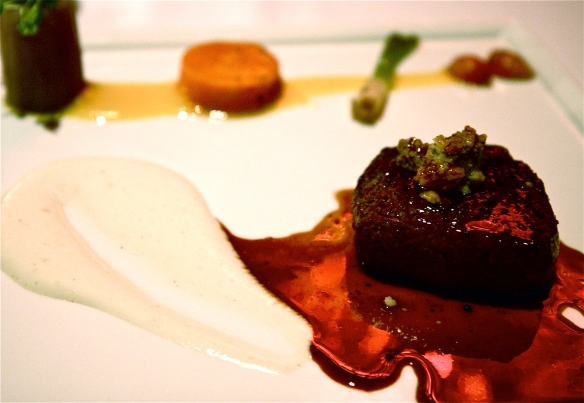 Estudio en flan– three different styles of the classic flan with progressing degress of sweetness, with three complementary sauces.  The first flan was light and fresh like a panna cotta, made with vanilla beans and paired with a blackberry curry sauce.  The second flan was like a traditional custard flan with a medium consistency and smoky caramel flavor.  This, paired with a lime mint sauce, was my favorite flan.  The third flan, served with strawberry jus, was thick and dense like a block of cheese.  Overall this was a delightful and innovative dessert that paired wonderfully with a glass of tequila de mujer, a vanilla infused tequila that was a Rivera special.  Tequila with dessert?  I was hesitant at first, but the knowledgable sommelier was right again. This tequila was divine. 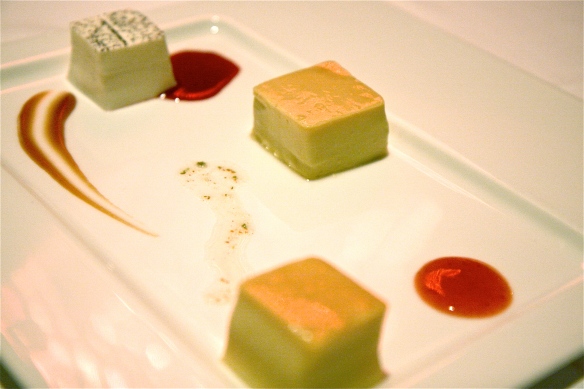 As I finished the fabulous meal, I listened to Chef Sedlar talk about his passion for tequila as he pointed to the beautiful walls of the Sangre room lined with glass bottles of high grade Jalisco tequila.  Each bottle is kept under lock and key, and for a $1200 membership, you can get your name engraved on the side of your bottle. 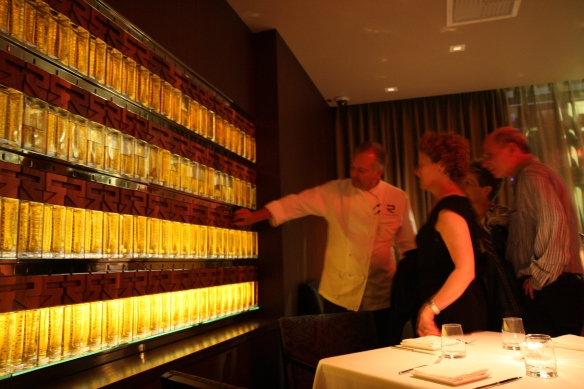 The dishes at Rivera were bursting with flavor and imagination, and the wine and tequila were amazing.  The ambiance was sexy, and the contemporary decor was avant-garde with a touch of class.  The staff was incredibly warm and attentive, and I fell in love with Chef Sedlar’s grace and charm.  Rivera is a new beacon of culinary radiance in the once lifeless downtown LA.

Random trivia:   Last year scientists discovered that they can make synthetic diamond crystals from tequila.  Even the cheapest brands of tequila, at $3 a bottle, were good enough to make diamonds.