In a fickle city like Los Angeles where restaurants turn over as quickly as the tides, and chefs shuffle in the blink of an eye, nothing is more valuable than a reliable restaurant where you have a long standing relationship with the staff.  Hype, celebrity status and good PR may fill the tables on opening night, but only quality, character and consistency will keep them coming for years to come.  Consistency, in particular, is a virtue that even the best restaurants in the city fall short of.  How many times have you returned in hopes of reliving the splendor of a certain delicious dish, only to find that it didn’t taste quite as good the second or third time around?  Such disappointments are bound to halt reservations and make that restaurant a thing of the past.

Consistency, quality and most of all respect for the chefs and the respect with which they treat their products, are what has kept me coming back to Kiriko for 12 years since their opening in 1999.  For me Kiriko fulfills my need for いつもの味、いつもの笑顔, which translates to ‘the same flavor, the same smile’, again a tribute to how important consistency is from a diner’s perspective.  I may have cheated on Kiriko a few times over the years to try other sushi restaurants, but I always come back home to Kiriko where I know that I can count on the best food.

Executive chef Ken Namba grew up in Tsukiji, the most famous fish market in the world, while getting inspiration from his parents who run a restaurant there. The sushi here is spectacular, and what I consider to be one of the best in Los Angeles.  At Kiriko you can get it all- traditional dishes are perfectly executed, while modern preparations with a drizzle of truffle oil or a hint of pepper demonstrate his playfulness and creativity.

There is a comfort in being a regular and having your usual chair, your usual spot, the same friendly welcome and the same flawless dishes that become a part of your repertoire.  Red snapper sushi with sprinklings of sea salt and a dash of yuzu rinds is how I always commence my meal, with uni topped with freshly grated wasabi, tender mirugai sashimi, house smoked king salmon, engawa (halibut fin) and seared fatty toro following soon after.  Sushi doesn’t get any better than this even in most places in Japan. 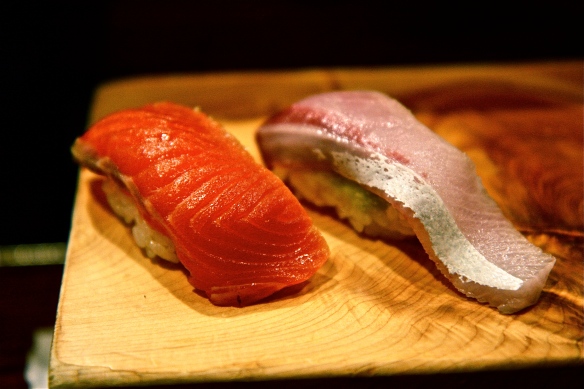 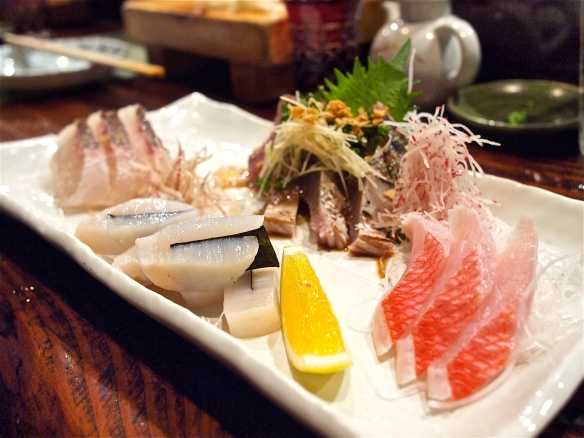 Kiriko has an extensive daily specials menu in both English and Japanese, but many items don’t make it onto the English menu simply because they aren’t translatable.  A winter delicacy called shirako, for one, surely doesn’t sound appetizing in English- cod sperm sac.  Yet Kiriko’s version is elegant, the pearly white sacs of warm milky cream mingling with the tartness of ponzu. 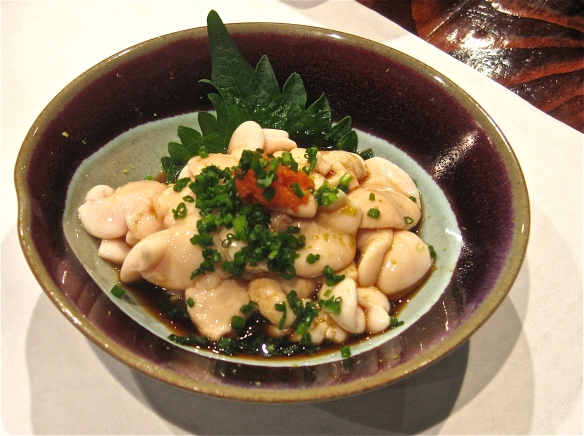 Mekabu salad with okra and grated yamaimo/Japanese yam is also difficult to translate both in concept and in texture.  Mekabu, which are the flowering sprouts of wakame seaweed, have a distinct gooey slimy texture.  At Kiriko these greens get mixed with even slimier companions, sliced okra and grated yamaimo, and spooned over generous chunks of tender tuna.

A traditional Taiwanese dish of century eggs on tofu gets a Kiriko twist when the dark preserved eggs get chopped up and mixed with silken tofu and accented with house made la-yu chili oil.  The preserved duck eggs are also known as 1000 year old eggs, or pitan in Japanese, something that a diner looking for spicy tuna rolls may not necessarily be inclined to order. 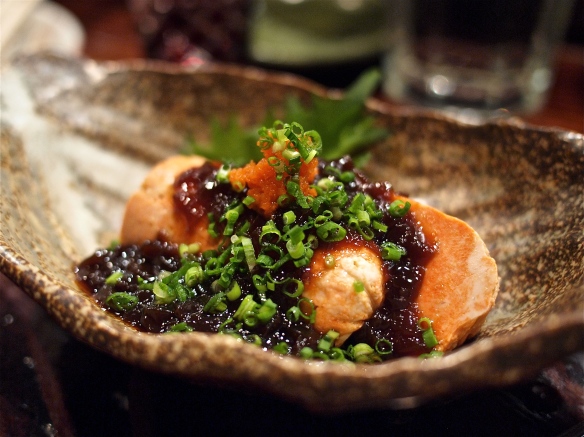 Ankimo sautéed with garlic and soy sauce on a recent visit was smokey, buttery and delicious, making the sake flow ever so freely.

Hama hama oysters, when in season, are garnished with a dash of ponzu and a dollop of chili daikon radish to accent the natural brininess of the meaty treasures while Kusshi from British Columbia are best enjoyed with a simple squeeze of citrus. 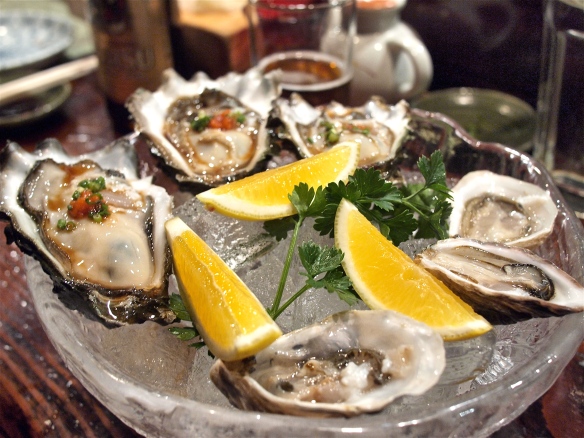 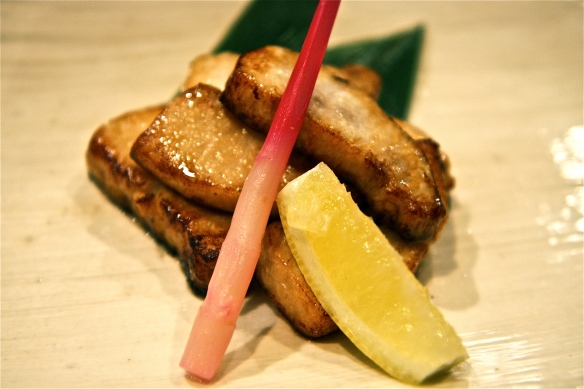 Sushi is the main attraction at Kiriko, but the vegetable platter is not to be missed.  Through the delicately prepared assortment of 5 fresh vegetables that change with the seasons, one can get a taste of traditional Japanese flavors.  Japanese pumpkin amani, sweet and tender like a freshly churned block of butter, spinach and shiitake mushroom ohitashi garnished with shaved bonito flakes, green beans tossed with white sesame dressing in a classic ingen no goma-ae preparation, thinly sliced lotus roots kinpira style and a refreshing salad of mizuna greens and daikon radish in a pickled plum ume vinaigrette are beautiful and delicious.

As if the food isn’t good enough, the desserts at Kiriko are even better.  Everything is made from scratch with the freshest ingredients, like Chef Ken’s tomato gelée, the most dainty cube of delicate fruity savor, bursting with the sweetness and subtle acidity of heirloom tomatoes at its summer peak, served with a drizzle of olive oil and basil ribbons.  I’ve only had the pleasure of having this once, but it left a lasting impression on my palate. 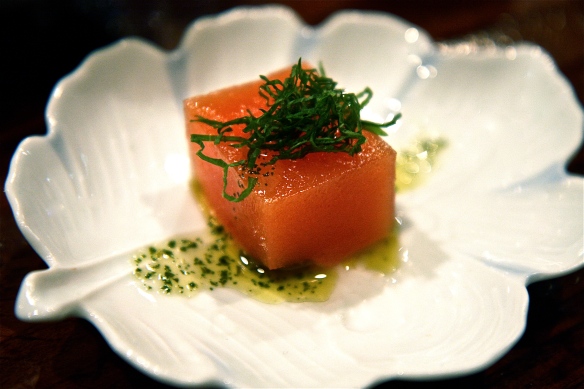 House made ice creams and sorbets are delectable- the green tea ice cream reflects the true bitterness of Japanese matcha, the black sesame ice cream a creamy earthy dark delight, the ginger brown sugar ice cream not skimping on the characteristic medicinal zing of ginger, and the black truffle ice cream, if you’re so lucky to be dining at Kiriko on a day that it’s served, packed full of that unique prized earthiness that we so love.

Unlike certain other sushi restaurants in Los Angeles that scowl at customers who want spicy tuna rolls and California rolls, Kiriko doesn’t discriminate against such diners.  They’re too nice to impose judgement on anybody that walks through their doors.  They will happily make these rolls for you, although you would be missing out on the real delicacies that they’ve flown in from Tsukiji market, like hiramasa, shimaaji, kinmedai, kamasu, kampachi, bincho and tako no sakurani.  Sound unfamiliar to you?  That’s exactly why you have to trust these talented chefs and discover a whole new way to enjoy sushi in the best sushi restaurant in Los Angeles.

Random trivia:  Did you know that according to myth, century eggs were once prepared by soaking eggs in horse urine?   The myth probably comes from the pungent odor of ammonia which is reminiscent of urine.