While in Barcelona, I couldn’t help but feel a sense of strong yearning and sadness at the fact that I was so close to El Bulli, yet so far away.  When will I finally get my chance to dine at the best restaurant in the world?  To feel like I was at least a step closer to fulfilling my dream, I went to Inopia in Barcelona. 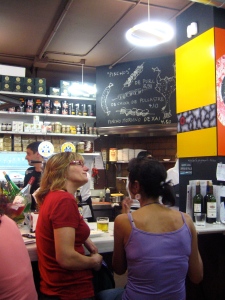 Inopia is run by Alberto Adrià, the younger brother and partner of Ferran Adrià, the renowned and famous chef of El Bulli. During the 6 months that El Bulli is open for service, Alberto heads the pastry kitchen at El Bulli, but otherwise he mans the kitchen in his small casual tapas bar in Barcelona.

In stark contrast to El Bulli, this place is very casual and it’s almost hard to believe that it belongs to a chef of such pedigree.  Brightly colored red, orange and yellow Andalucian tiles, bare fluorescent lights and graffiti on the walls decorate this tiny neighborhood joint that only has 1 dining table. 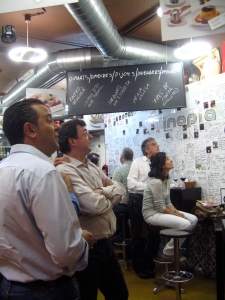 Most patrons sit on the tiny stools by the bar or stand by the counters as they watch fútbol on TV.  In fact, this particular evening the whole city was buzzing with excitement as all eyes were glued to the TV to watch the 2009 UEFA Champions League finals.  In a country that is loco for fútbol, you can imagine the frenzy in the air as their beloved Barcelona team battled Manchester United.

Just as we sat down at the counter, Barcelona scored their 2nd goal and everybody, including the servers, started screaming and whistling.  Their team was on fire, and the place was buzzing with passion.  Many were wearing the red and blue jerseys and cheering on.

Although Inopia doesn’t have an English menu, the server was eager to explain the specials of the day in English to us.  All of the staff were extremely friendly and welcoming.  The menu, like most tapas bars in Barcelona, has a good selection of olives and canned seafood (conservas).  We opted for prepared items to see what Alberto Adrià could do.

The ensalada rusa was listed as an Inopia specialty, so we started with that.  The potato, mayonnaise, red pepper and olive salad was good, but…this was a specialty dish?  Really?  It’s something that I would make half-asleep with leftovers. 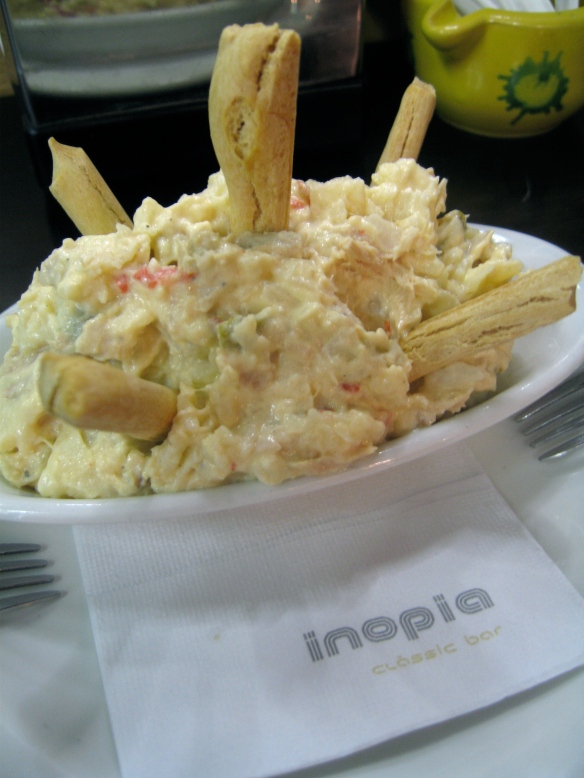 There’s a section of the menu called El mundo de la anchoa, or ‘the world of anchovies‘.  That evening there were 6 types of anchovies to choose from, and they were to be ordered by fillets.  Our server told us that the San Filippos, for 1.90 Euros a piece, were the best quality.  These anchoas del Cantábrico en salazón San Filippo were indeed meaty, perfectly fatty, and deliciously salty. 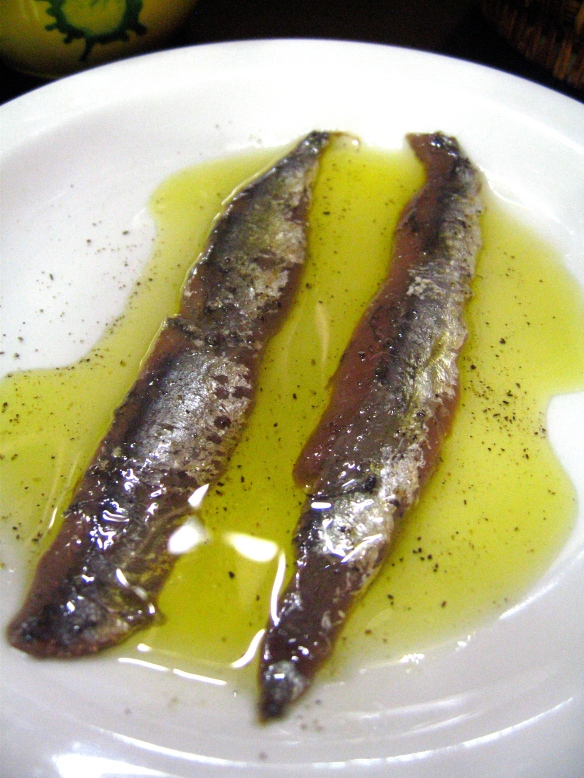 The Torrada Mallorquina was a really interesting take on bruschetta.  Chopped tomatoes, onions and olive oil were carefully spooned over a layer of sobrassada mallorquina, a spicy and smokey chorizo spread.  The ‘air bread’ that they used was crispy, light and delicate, and I could’ve eaten these all night with my glass of red wine. 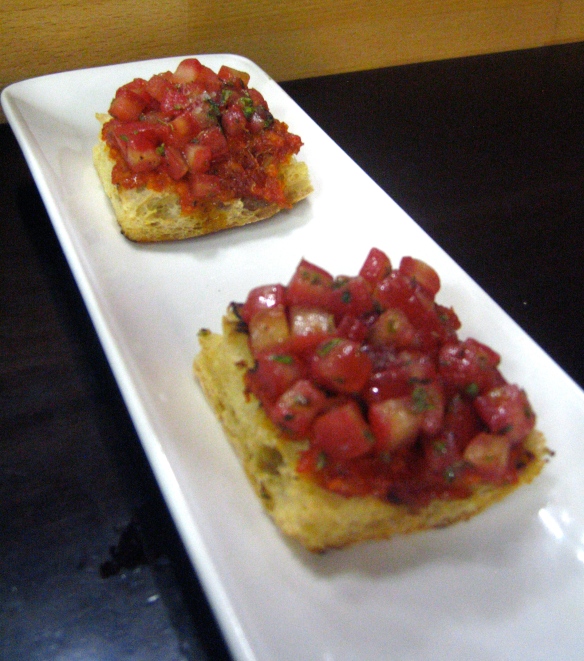 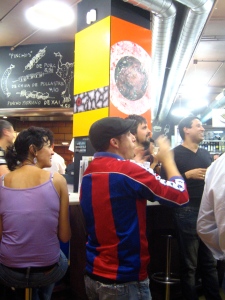 The moment of victory for Barcelona!

It was around this time that Team Barcelona officially became the champions of the 2009 UEFA League, and the place went crazy. Horns, crackers, shouting, whistling, singing and skyrockets went off outside in a mass celebration hysteria.  It was an amazing experience to be in the middle of this city-wide festivity and eating tapas while soaking it all in.

The plato frío de lomo de atún soasado con escabeche ligero, seared tuna belly with a Montserrat tomato side, drizzled with soy sauce and olive oil, was quite good.  I was surprised to be having this very Japonesque toro sashimi dish at this famous Barcelona digs.  The drizzle tasted almost exactly like ponzu.  The lightly seared tuna belly slices were extremely tender and delicate. 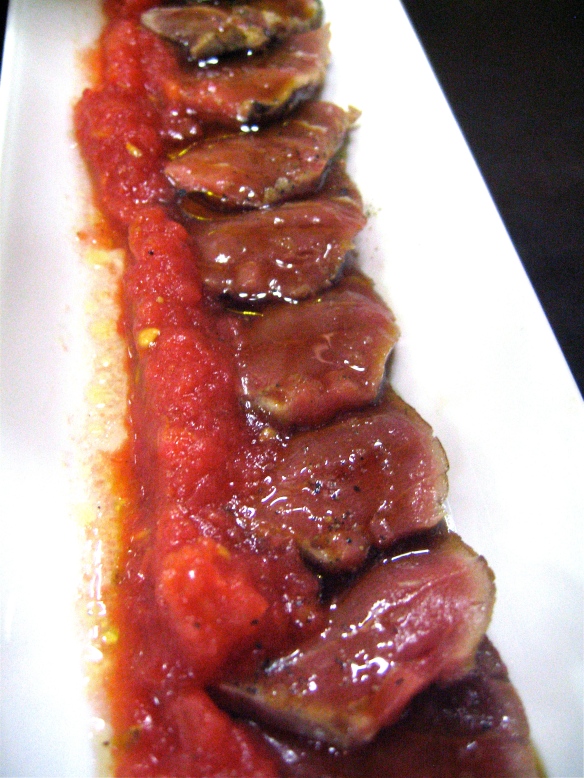 The croquetas caseras de Jamón ibérico were piping hot, straight out of the deep fryer.  It took a whole 5 minutes until we could even get close to it.  The rich interior was creamy, hearty and decadent.  Although my dining partner enjoyed these, I wasn’t blown away.  However, for 1.90 Euros a piece, it’s not a bad deal. 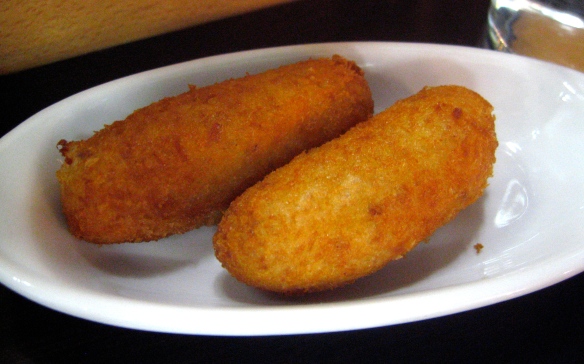 The big and meaty sardinas en escabeche were quite good, well infused with thyme and bay leaf aroma, but it wasn’t as good as the one that I had at Tapaç 24. 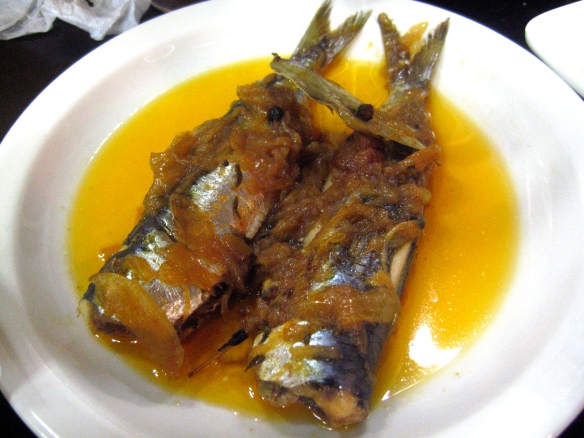 The pincho moruno de cordero or lamb skewers, were really good.  Listed on their menu as one of the Inopia specialties, these tender and juicy pieces were delectably seasoned with fennel seed and parsley.  This was my favorite dish at Inopia. 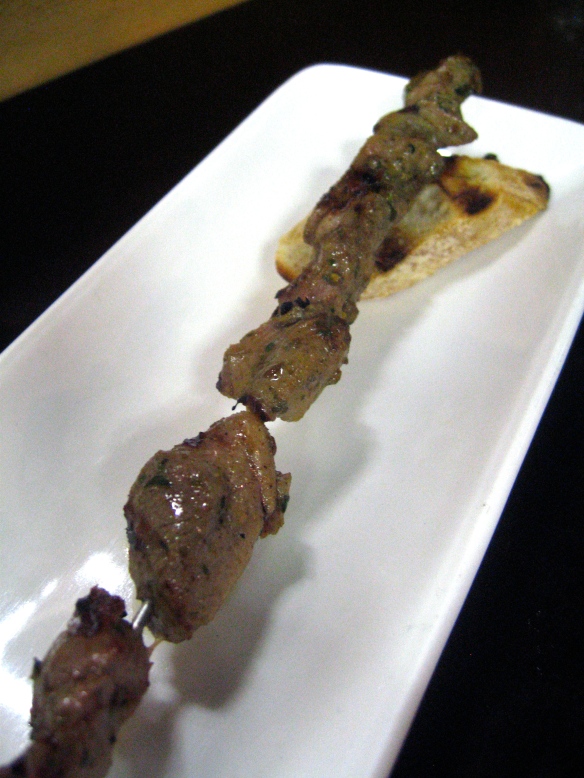 In another head to head competition, we ordered Inopia’s  Bikini de mozzarella y paletilla Ibérica hervida, the mozzarella and Iberico ham grilled sandwiches.  It wasn’t just the presence of black truffles that made Tapaç 24 the undoubted winner again, but also the quality of the bread and the way it was grilled. 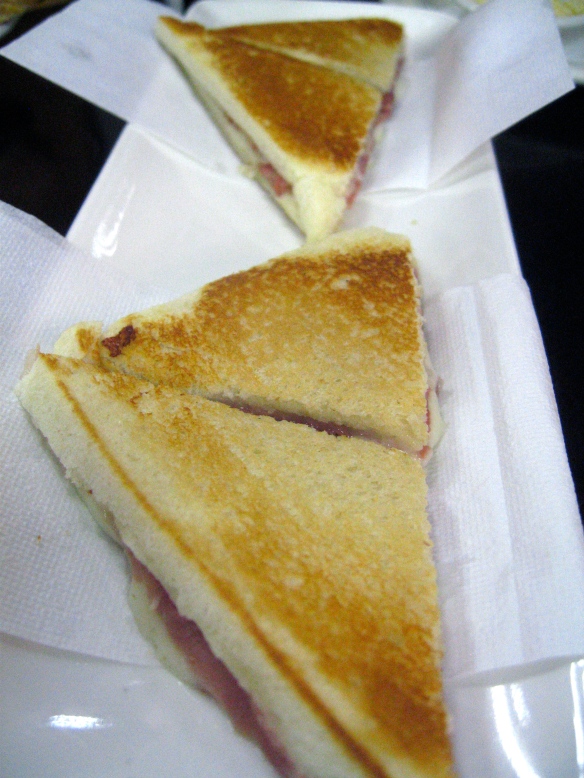 Although the service was great and the atmosphere on this particular victorious night was incomparable, the food was mediocre at best.  Perhaps I came in with too many expectations, but the food simply fell flat.  After all of the hype and rave reviews, I couldn’t believe that this was all that Inopia had to offer.  I wanted to give Inopia the benefit of the doubt, and thought that perhaps Alberto Adrià was not in house that evening.  But no, there he was, behind the bar and at the grill, and I even got to meet him and chat with him.  He was a charismatic man with a powerful intensity that was almost intimidating, but his food reflected none of that.

Alas, what I thought would be the closest thing to El Bulli ended up being the farthest thing from El Bulli.  Given the number of restaurants in Barcelona whose chefs have trained with the grand master Ferran Adrià, it’s probably better to go elsewhere for spectacular cuisine in Barcelona- Inopia is not worth your time.  Obviously, none of this would even be an issue if you’re one of the lucky few who have a reservation at El Bulli.  As for me, until that happens, I guess I’ll just keep drooling on my A Day at elBulli book.

Random trivia:  Did you know that you can get something called clupeotoxin poisoning from eating anchovies contaminated with the toxin?  Death occurs in 50% of people poisoned by clupeotoxin.  If you experience a metallic taste in your mouth and your nose turns blue after eating anchovies, then you’re in trouble.