“Travel north.  It will bring you good luck,” my feng-shui studying friend told me one day.  And with that, my trip to Vancouver, Canada was planned on a whim.  Despite having traveled all over the world from Sierra Leone to Laos, and Cuba to the Canary Islands, I had never set foot in Canada.  I suppose it’s the comfort of knowing that I could go any day, given the proximity to the US- the same excuse of ‘local laziness syndrome’ that applies to trips within the US that I haven’t been able to materialize yet.  With the excitement of the Winter Olympics this year, it seemed only natural to travel way north past Napa, Portland and Seattle up to Vancouver to seek good luck, good fortune and of course good food.  Once my plane ticket and accomodations were secured I started researching Vancouver restaurants online, and was quite surprised to find the most buzz not in a 5 star hotel restaurant or in a harbor-view seafood dining establishment, but in a street food cart called Japa Dog.

Japa Dog, a street vendor specializing in hot dogs reinterpreted with Japanese flavors, was started by Noriki Tamura who moved to Vancouver in 2005.  Combining traditional comfort food with haute ingredients and giving it a fresh new twist seems to be the trend these days- maple bacon cupcakes, squash blossom & burratta pizza, kimchi kalbi tacos and black truffle & foie gras burgers.  Who isn’t reinventing our beloved staples?  Spruced up hot dogs aren’t a new concept either.  Hot Doug’s in Chicago is probably the first place that comes to mind for their innovative ingredients and flavor combinations.  Their signature foie gras dog had to be removed from the menu for obvious reasons, but they’re still an epic establishment.   Los Angeles has its share of gourmet wiener joints too.  Let’s Be Frank tops their grass-fed beef dogs with a marvelous Indian pickled pepper relish, Downtown Dogs serves a beef dog with avocado, arugula, basil aioli, tomatoes and fried onions,  Dogzilla demonstrates Japanese flair with their yakisoba and furikake dogs, and Wurstküche offers exotic dogs such as buffalo, alligator, duck, and my favorite rattlesnake and rabbit with jalapeño .

Japa Dog has several locations, and I was happy to discover that there was one practically outside of my hotel lobby on the corner of Burrard and Smithe.  The Burrard strip, lined with boutiques, hotels, tall office buildings, restaurants and the occasional historical church has an energetic Manhattan vibe.  Buses and yellow taxis whiz through the city grid as pedestrians with the haste and determination of a New Yorker scurry by.  It’s the perfect backdrop for a hot dog stand, only this one has happy and energetic Japanese staff in bright orange uniform ready to shower you with plenty of pep.  It was after the lunch rush on a weekday, but there was still a long line of tourists and locals waiting for their Japanese dogs.  I can’t imagine the craziness that these street corners experienced during the Olympics- news reports say that Japa Dog was one of the most popular pit stops for international visitors who waited for up to an hour in the winter chill for their hot dogs. 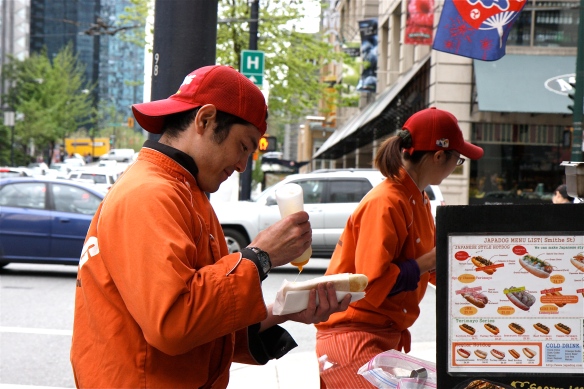 Japa Dog offers standard dogs such as all-beef, Kobe beef , turkey, kurobuta pork, jalapeño & cheese, bratwurst and veggie, but these are not what attract the masses. It’s the unique themed dogs, dressed up with classic Japanese ingredients like daikon radish and dried seaweed, that diners adore.  In true Japanese spirit, Japa Dog carts even sell dagashi, old-fashioned snacks and candies that evoke a strong sense of nostalgia for people like myself who grew up in Japan. 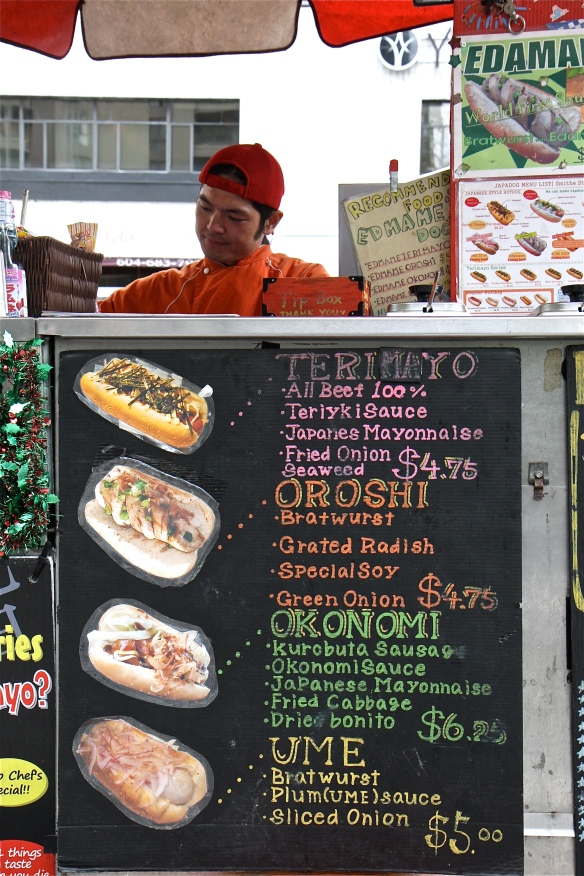 The Japa Dog staff recommended the Terimayo dog, the most popular selling item.  An all-beef dog tucked in a soft steamed sesame bun with teriyaki sauce, drizzles of sweet Japanese mayonnaise, fried onion and dried nori.  Japa Dog’s slit sausages are first boiled then lightly grilled to order, giving them a nice snappy crunch with a juicy moist interior.  Due to the immense popularity of the Terimayo concept, all of their other dogs can be made Terimayo style.

My favorite was hands down the Oroshi dog, a bratwurst topped with generous heaps of tangy grated daikon radish, special soy sauce and chopped green onions.  The light flavor of the bratwurst with the refreshing bitterness of the oroshi daikon was amazing.  Oroshi daikon is a staple in Japanese cuisine, adding texture and flavor to grilled fish, shabu-shabu, tofu and minced meat patties, but who knew that it could liven up a hot dog so perfectly? 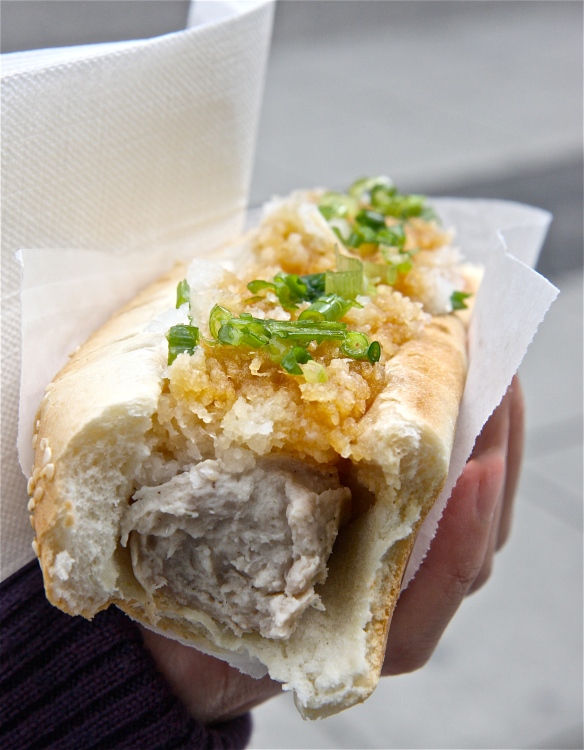 With room only for one more dog, I skipped the Okonomi dog made with kurobuta pork sausage, okonomi-yaki sauce, Japanese mayonnaise, fried cabbage and shaved bonito flakes, and instead went for the Ume dog.  The light flavors of the oroshi dog made me want something even more refreshing.  Ume is short for umeboshi, salty and sour pickled plums, and it was used to garnish a bratwurst with thinly shaved onions.  I was hoping for a prominent ume flavor, one so strong and sour that it would make me pucker my lips and squeeze my eyes shut, but it was rather mild, possibly tempered for non-Japanese palates.

Other unique wieners at Japa Dog include the Edamame dog, a bratwurst impregnanted with whole green edamame beans, and a Kurogoma kimchi dog made with a turkey smokie with toppings of black sesame and kimchi.  Research revealed a Misomayo dog with Japanese mayonnaise and miso paste, but perhaps it’s been buried in the Japa Dog vault as I didn’t see it at any of the current carts. 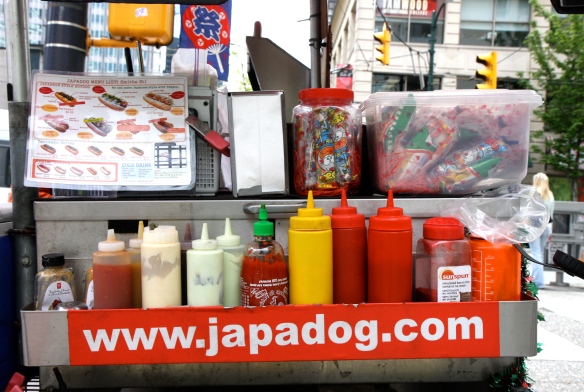 Eating a juicy hot dog on the busy street corners of an urban jungle makes for a satisfying meal, but enjoying a delicious gourmet dog with Japanese flavor and flair is a special experience.  Vancouver’s got a good thing going in Japa Dog, which is why the owner has his eye on expanding to the US.  What better place to start than New York, where he plans to open a Japan Dog by the end of the year.  City dwellers will undoubtedly take to these loveable trendy wieners that have already gotten a stamp of approval by Anthony Bourdain in the Vancouver episode of No Reservations.

available at various street corners in Vancouver, BC Canada

Random trivia: Did you know that the average hot dog is consumed in 6 bites?

“The noblest of all dogs is the hot dog- it feeds the hand that bites it.”  -Lawrence J. Peter