Chef Susan Feniger of Border Grill in Santa Monica launched her solo debut restaurant Street, on Highland and Melrose, a few months ago.  The inspiration for the restaurant is global street food cuisine, the exotic comfort foods that give every culture its unique identity and flare.  Stemming from her extensive travels and appetite for adventure, Feniger composed an interesting and diverse menu with treats from countries like Japan, Singapore, India and Thailand.  As I perused the busy and somewhat scattered menu, I was curious to see if she could pull this all off.  Los Angeles already offers authentic delicious global cuisine- you can get satiating charcoal BBQ kalbi in Koreatown, the best papaya salads in Thai Town, mouthwatering pho in Little Saigon, and delectable dim sum in Chinatown.  Can one restaurant offer everything and still satisfy the most discerning palates of fussy Angelenos?

The interior of the restaurant is themed in black and orange, with glowing orange neon tubes on the walls interspersed between large sketches of stick figures which looked like messy graffiti.  I felt like I was back in the 80’s- the decor was old, outdated and frankly a bit cheesy.

As my friends and I toasted with a bottle of Prosecco, we immediately entered into a heated debate about what to order.  We knew what most of these dishes were supposed to taste like in its perfect state; should we trust this American chef, take the plunge, and order these items?  Will we only be disappointed or pleasantly surprised?  Should we not take the risk and order the ‘safer’ items instead?

We started off with the New Jerusalem Bread salad with Jerusalem artichokes, Persian cucumbers, tomato, olives, feta cheese, parsley, cumin toasted olive bread with a warm sumac oil and lemon dressing.  It seemed like a safe bet to start with.  The salad was refreshing with a nice acidic dressing, tart freshness of the parsley, and juicy tomatoes.  The olive bread was too chewy and moist for the salad, but it was a nice dish overall.

The Indian Vada dumplings, homemade urid dal fritters with yogurt sauce, mint and tamarind date chutney.  The mint sauce was refreshing and light, and the flavors melded well together, though the dumplings were too chewy.

The Hawaiian Alanui poke with diced ono fillet and avocado on crispy sesame rice cakes.  The fish was fresh and tender with a nice subdued acidity to the marinade, and the avocado brought an additional layer of rich buttery texture to the dish.  The rice cakes were nice and crispy, though a lot thicker than I imagined it would be. 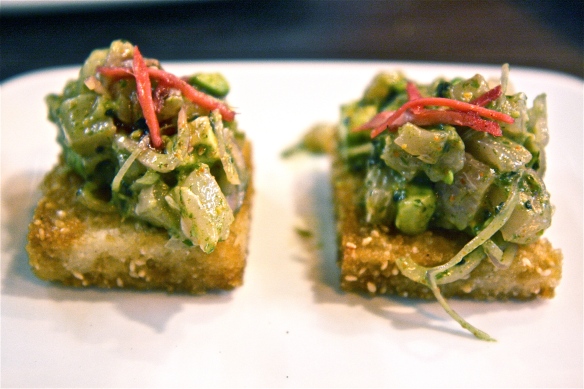 The Moldavian meatballs, ground beef and kasha meatballs simmered in a sweet and sour tomato sauce with dill sour cream.  This was my favorite dish of the evening- the meatballs were soft, tender and airy, and the dill sour cream sauce had a nice tart kick to it.

The Singaporian Kaya toast dish with coconut jam-spread toast served with softboiled egg with soy sauce and white pepper.  The egg was perfectly cooked, and the runny yolk coupled with the dark rich soy sauce made for a nice dipping sauce for the toast.  The bitter bite of the fresh watercress was a nice contrast to the sweetness of the coconut jam.  This dish seemed to exemplify the true notion behind simple but good street food- but at $10, it wasn’t street food priced. 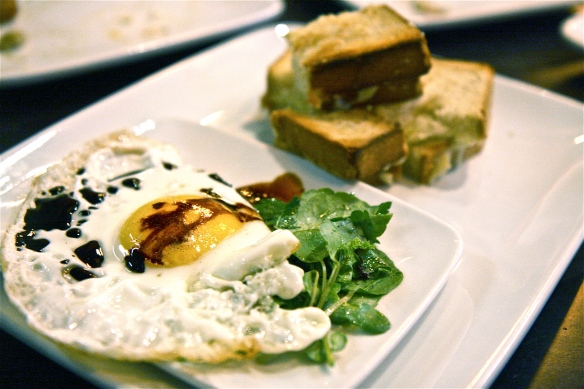 We ordered the Tatsuta-age Japanese fried chicken dish to see how well Feniger understood Japanese food.  The chicken was marinated in soy, mirin and sake, deep fried in a rice batter, and served with kewpie mayonnaise sauce, pickled vegetable slaw and chilled soba noodles.  I was really hoping that she wouldn’t butcher this wonderful Japanese dish, but unfortunately she did.  Tatsuta-age is usually made with small bite sized pieces of tender chicken meat that are individually battered and fried, so I was quite surprised when we were presented with 1 enormous piece of deep fried chicken that was cut into 4 huge pieces.  The soba noodles were mediocre at best, and we were all sorely disappointed and let down.  And for $22? Even in Tokyo, one of the most expensive cities in the world, Japanese people wouldn’t pay that much money for a tatsuta-age plate at a restaurant.  At this point we decided not to order any more Japanese dishes, especially not the shio ramen (which I could not believe was going for $15).  It would be a miracle if they could execute a half decent bowl of ramen. 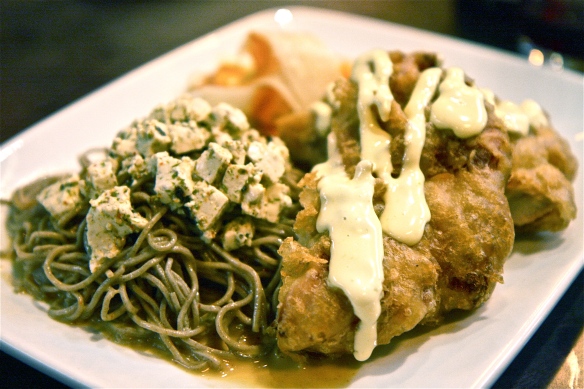 The Korean barbecued short ribs in a sweet and spicy Korean glaze, served with asian pear salad and roasted mushrooms, was also a failure.  Although the meat was tender and juicy, the glaze was unpleasantly sweet and nothing like the real deal that I can get in Koreatown. The enoki mushrooms and pear salad did not complement the flavors of the short ribs either, and none of the essences of the individual components of this dish melded together.

The Massamun chicken curry with red yams and mushrooms in a coconut milk curry sauce had a very nice flavor with lots of beautiful spices, but we were all unhappy that it came already ladled over a bowl of rice.  The rice was completely drenched and saturated with curry sauce, and it would have been nice to have the curry and rice presented separately.  And for $16? 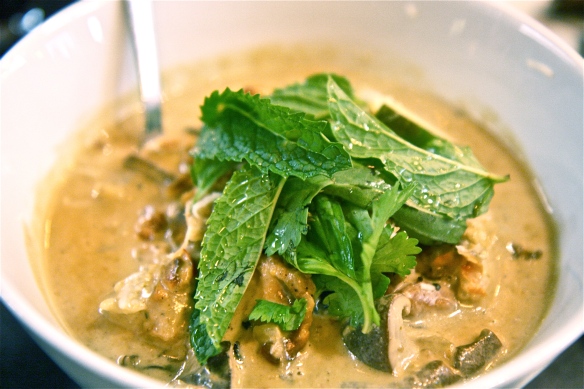 For dessert we had the Vietnamese yogurt panna cotta with damiana muscat and homemade marmalade.  The panna cotta, which tasted like plain store-bought yogurt, lacked richness and depth, and the marmalade sauce was overwhelmingly sweet. 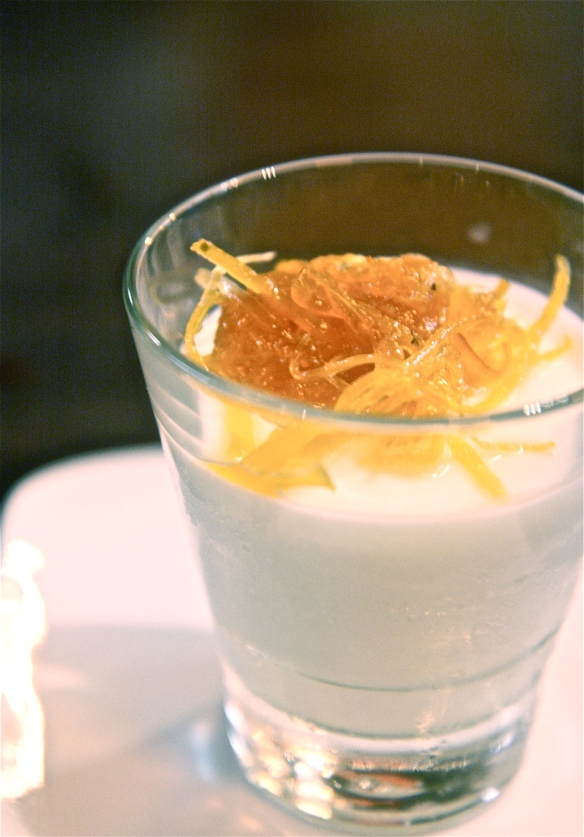 The Egyptian Basbousa, a lime soaked semolina cake with macerated blueberries, lime curd and whipped cream was even worse.  The cake was dry and brittle, the blueberries not exactly macerated, and the lime curd quite boring. 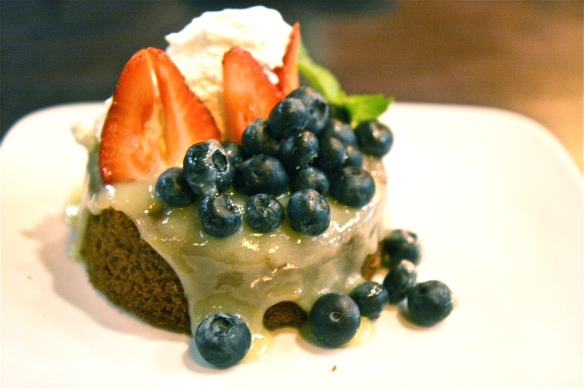 Although Street is potentially a fun place to share a variety of different ethnic flavors, it doesn’t quite deliver.  I love the global street food concept, but none of the dishes truly captured the authentic native flavors or essence of the culture that it was representing.  On top of that, none of the dishes were priced at appropriate friendly street food prices.  Case in point: Street is now offering take-out bento boxes with 6 items, for $25.  A take-out box for $25?  Come on now…

Your money is better spent just down the street at Mozza.

Random trivia:  The Jerusalem artichoke (also called sunchoke) is not actually an artichoke, but a member of the North American sunflower family. The name comes from the Italian ‘girasole articiocco,’ or Sunflower artichoke. Mispronunciation in English accounts for the development of the modern name.