One of the best ways to discover the beautiful city of Vancouver is on bicycle.  Renting wheels for the day and riding around Stanley Park is perhaps one of the most popular activities for both locals and tourists.  Downtown Vancouver and its vicinity is big enough to house different neighborhoods each with its own unique characteristic and charm, but small enough to get acquainted with in one day.

Start at the entrance of Stanley Park and bike along the northern waterfront, past the interesting sculptures and installations on Cardero Park, the benches on Coal Harbor Road, Vancouver Convention Center, and eastbound by the railroad tracks into Chinatown.  On through the cobblestone streets of Gastown to get a glimpse of what Vancouver may have been like during the Depression, and due west into downtown to glide past upscale designer stores and hotels on Burrard Street.  Burrard will take you across the water into Kitsilano where you can stop at charming boutiques, cafes and restaurants.  Looping back upward across the Granville bridge will take you into one of the most fascinating locations in the city, Granville Island.

During the industrial boom in the early 20th century, Granville Island served as a key industrial hub for factories that produced machinery and supplies for the forest, mining, construction and shipping sectors.  Many of these factories closed down during the Great Depression, and the island was in shambles until the city embarked on a large scale project to reclaim the land and transform it into a thriving public space.  Save for a concrete factory and a drill bit manufacturer, all of the warehouses are now inhabited by artists, craftsmen, specialty vendors, theaters and the grand Public Market. 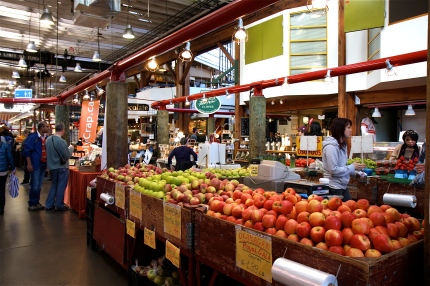 The large covered market is alive with the scents and colors of beautiful produce at the peak of their season, and friendly vendors will greet you with samples of their offerings.  Each stall showcases unique homegrown products and fine local delicacies that represent the bounties of Vancouver.  Bright orange mangoes as sweet as sap, fire red heirloom tomatoes, buttery green avocados like you’ve never tasted before, and the occasional unusual finding, like green bracken fiddleheads, all under the same roof. 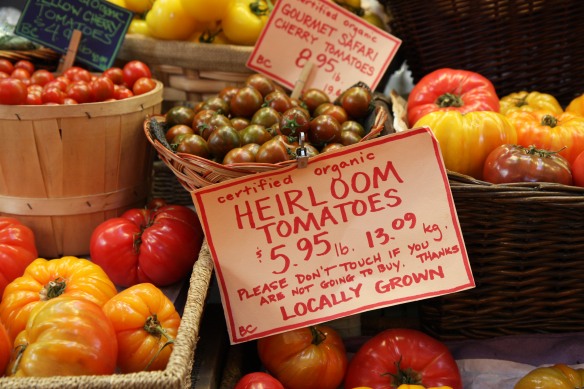 Once a week Granville Island hosts a farmers market, the most established and oldest of its kind in Vancouver for the last 20 years.  Here you can find additional fresh produce straight from the field, to supplement your shopping for the week.  Whatever you can’t find there can be found back inside the regular market, like rambutan, mangosteen, litchi and longan at the exotic fruit stand.

Interspersed between produce stalls are seafood stores that sell Vancouver specialties.  Throw back some freshly shucked oysters, harvested in the local Canadian waters, or indulge in any one of their salmon delights, like salmon jerky, salmon sausage, salmon pepperoni sticks, smoked salmon slices, or double smoked sockeye salmon strips.

You can find rare herbs and spices all throughout the market, but a good place to stop is the South China Seas Trading Company, specializing in hard-to-find gourmet items from Asia, Africa, Latin America and the Middle East. Fresh Thai chilis, turmeric, ginseng, kalamansi lime and jujubes will make for an interesting culinary expedition, along with the many kitchen gadgets and spices that are neatly packaged on the racks.  Not sure how to use them?  Pick up a cookbook and get inspired for an ethnic feast. 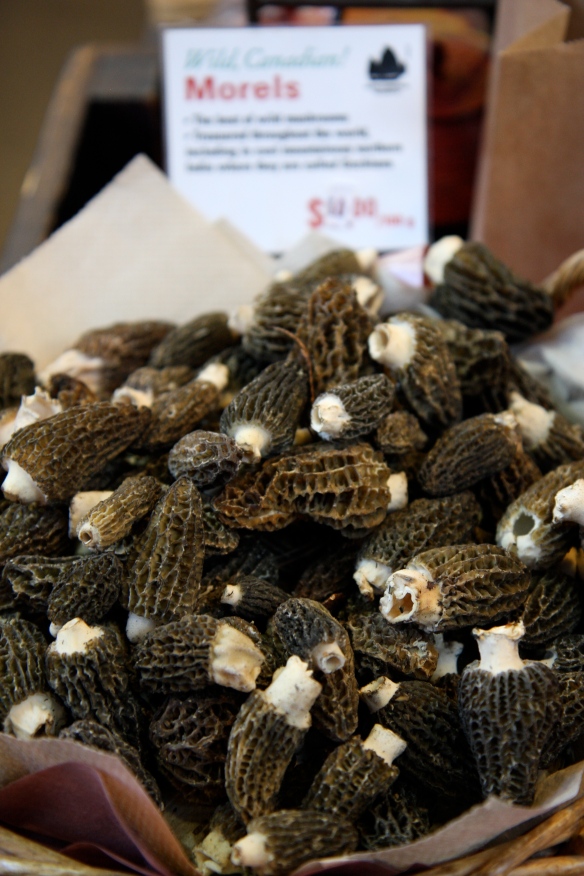 Sniff your way around the corner to ‘A la mode’, where they dish out pies and tarts by the slice or whole.  While waiting for your raspberry rhubarb pie to ring up, peruse the jars of papaya marmalade, red onion relish, cranberry chutney and sweet pear mustard at the stall next door, and envision all of the delicious ways in which to use them.  Take your pie outside with your newspaper, and enjoy your plate of heaven under the bright blue sky while watching boats sail by against the backdrop of beautiful condominiums and bridges.  At times they’ll have live music in the courtyard, or colorful art displays from the local galleries to peak your interest.

If the Vancouver chill sweeps in, run back inside and cozy up to the counter of the Granville Island Tea Company, where large black tins of teas line the walls and relaxed customers sip warm Darjeeling on the barstools by the walkway.  The menu here reads like an encyclopedia of teas, with rare leaves like organic gyokuro and organic orchid Oolong, and enticing flavored brews like Amaretto rooibos. 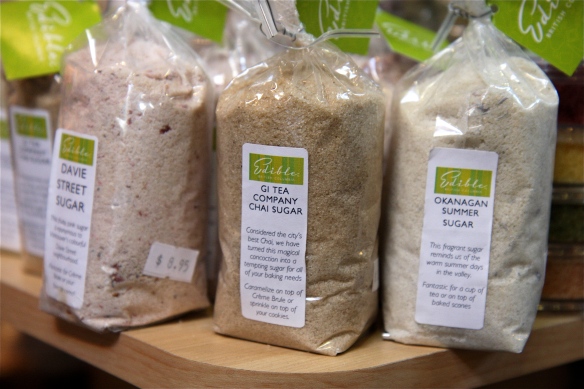 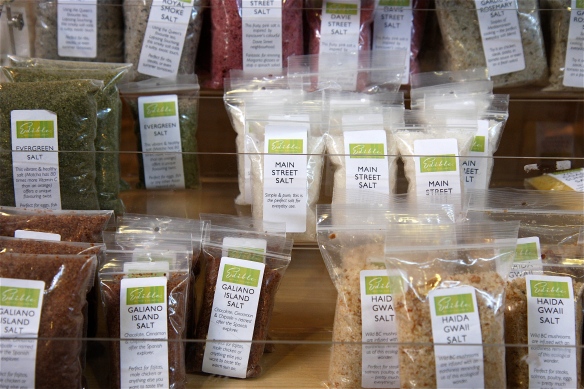 If you didn’t already come to the market with a grocery list and an agenda, walking through the market will certainly give you inspirations for meals to enjoy for the next month.  One such Italian pasta stand will make it easy for you to build the foundations for dinner that evening with offerings like smoked gouda sachetti, yam gnocchi, black pepper pappardelle, herb chicken agnolotti and spinach linguine.  Perhaps throw in some grilled spicy sausages with sun dried tomatoes, artichoke hearts, ricotta cheese and a few sprigs of mint, or pancetta with caramelized onions in a cream sauce.  The excitement of so many potential gourmet meals waiting to happen will overwhelm you here at Granville Island market.

Temptation from patisseries, boulangeries and confectioneries call out from all corners of this Vancouver market, but if you’re like me your nose will lead you straight to this final destination, the Oyama Sausage Company.  Here I spent about half an hour pressing my face up against glass cases of hams, sausages, bacons, terrines and pâtés that are mostly made by hand at this family owned business.  It was from here that the Salt Tasting Room got some of their wonderful charcuterie, like the sublime cured beef tongue that I had with Guinness mustard. 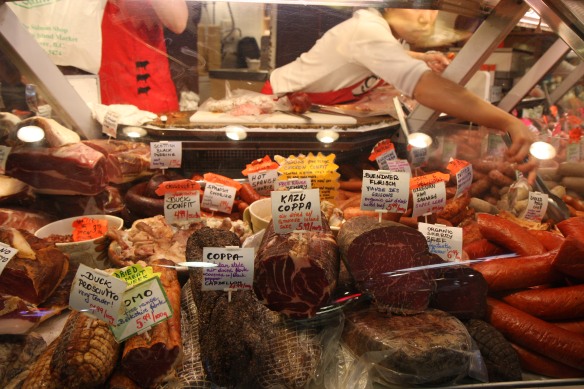 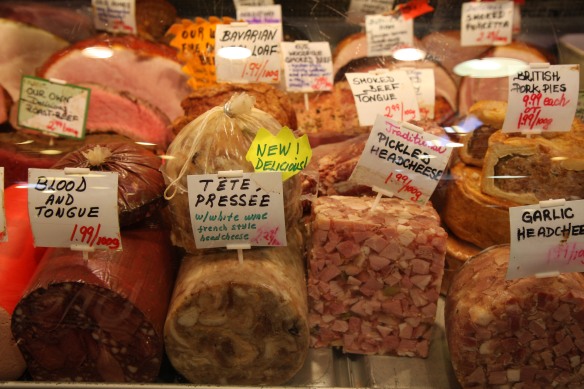 Granville Island is a true urban oasis, surrounded on all sides by the crisp cool waters of Canada, and a vibrant center for arts and culture.  The public market is open 7 days a week, until 7pm every day.  This is the epicenter of every Vancouverite’s daily nutrition, the heart through which rich oxygenated blood pumps forth into the kitchens of restaurants and households.  Easily accessed on foot, by bike, by car or better yet by Aquabus ferries, a visit to Granville Island market will make you wish you were a native Vancouverite.