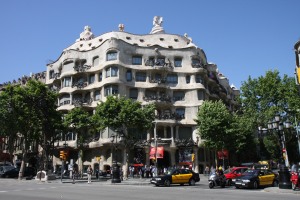 There’s a new culinary movement in Barcelona called ‘Bistronomia’, which combines the casual flare of traditional dishes reflective of the local food culture (bistro) and the more refined modern haute cuisine that is often found in Michelin starred establishments (gastronomia).   There are about 15 such Bistronomias in Barcelona which include La Mifanera, Cinc Sentits, Hisop, Alkimia and Embat.  Most are in the trendy Eixample district just north of the Plaza Catalunya, and all offer cutting edge cuisine with fresh local ingredients at more affordable prices.

Young 32 year old Chef Rafa Peña, a Barcelona native, heads the kitchens of Gresca as well as Spain’s bistronomic movement.  I decided to try Gresca for lunch, as I heard that they had an amazing lunch course for €19.  The tiny restaurant is just a few blocks west off of Passeig de Gràcia, the large popular shopping boulevard that boasts Gaudí‘s famous Casa Milà La Pedrera.  The space was tiny, accomodating only 7 tables that were beautifully set with crisp white linen tablecloths and shiny silverware.  The decor was minimalist and modern, and the service was generous.

The hostess kindly gave us an English menu and was more than eager to explain each menu item in detail for us.  Although the €19 set lunch menu seemed interesting (fresh sardines that day), there were too many intriguing items on their à la carte menu that I had to try.

After a delightful glass of parmesan crisps with paprika, they gave us the most amazing amuse bouche of foie gras with mango and chives. 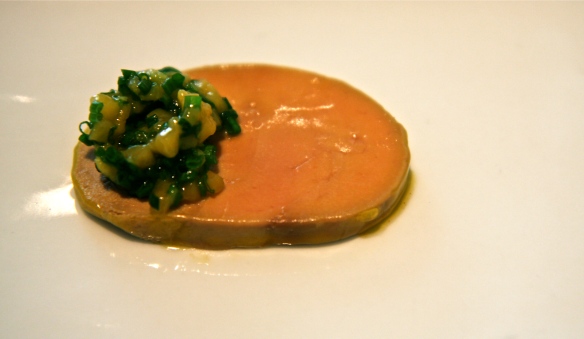 I started my meal with the octopus carpaccio with butifarra negra. The playful and geometric plating was astounding.  The thin slices of irregularly shaped octopus legs were like puzzle pieces, neatly laid out on a smooth background of Catalan-style blood sausage.  The periphery of the square display was framed with a refreshing crunchy ‘gremolata’ of mango, zucchini, lemon, cucumbers and onions that evened out the iron richness of the butifarra.  A rich smooth heap of potato purée waited patiently underneath as I carefully broke through its flamboyant cloak. 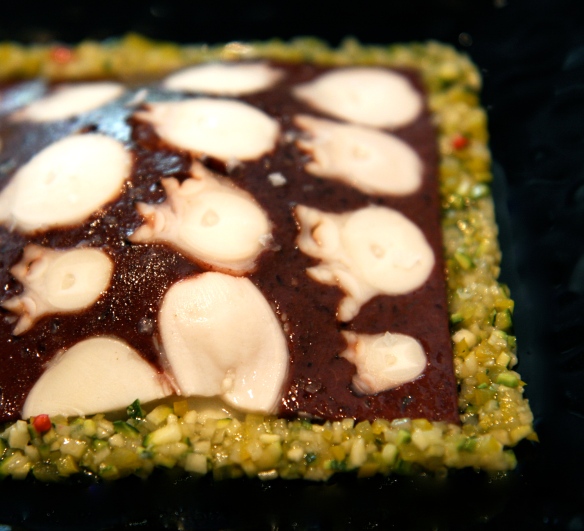 The onion soup with gruyere and trumpet mushrooms (chanterelles) was quite intense, salty and smoky.  It was so concentrated in earthy essence that it could probably cure any common cold.  Diced vegetables brought a nice crunchy texture to this soup.

I had the Gresca classic of Sant Pere fish with cockscomb and thyme.  The flavorful white fish had a delicate yet confident texture that stood up to the mighty collagenous  crests.  I loved these cockscombs that were tender enough to melt in my mouth but firm enough for me to feel a give on my teeth.

The entrecote steak with potatoes and thyme was simply divine.  My dining partner told me that it was one of the best steaks that she had ever had.  At first, we were both surprised at how large the steak was.  How do they expect us to eat all of this?  Tisk tisk, how sad that so much good meat will go to waste, I thought.  But by the end of the meal, the dish was squeaky clean and we were groaning with pleasure.  Mmmmm….entrecote…. 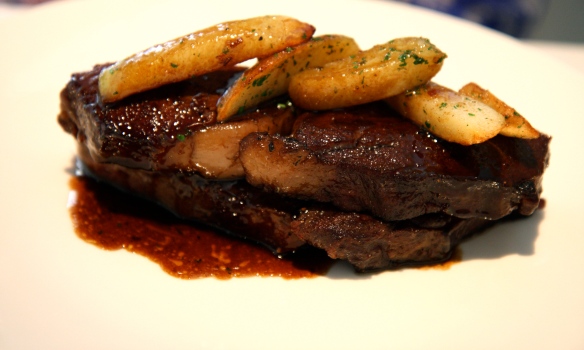 When I return to Gresca on my next Barcelona trip, I would love to try the other Gresca classics: roast pigeon with ginger, smoked duck with langoustines, and a dessert of roquefort cheese with litchi and green apple sorbet.  I highly recommend this quaint Bistronomia where you will get wonderful and attentive service due to the small number of seats.  Make sure you call well in advance for a reservation, as they book up early. 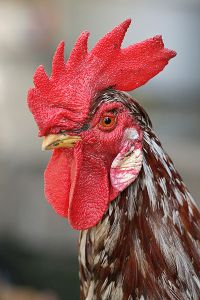 Random trivia:  Did you know that the cockscomb stops growing after a rooster is castrated?  Capons, which are castrated roosters, are highly prized in Europe for their tender and juicy flesh.