Done are the days of murder mystery dinners where diners sit through complex plots of set-ups, betrayals and killings woven through appetizers and entrees, and sift through side dishes of problem solving hints for an entertaining evening of detective work.  We’re not so interested in the whodunit anymore- the question being asked at Picca this season is ‘What is it’?

To kick off Picca’s new Sunday dinner hours, LA’s most beloved Chef Ricardo Zarate hosted a Mystery Meat Dinner, a 6 course meal of mystery animal parts served in his signature Peruvian style.  ‘What is it?’ was the only question that the normally kind and helpful Picca staff were refusing to answer that evening, tight-lipped and dismissive until the very end of the meal when the menu was revealed only to those adventurous diners who came to sate their curious appetites.

Hint: Bite sized portions of white meat, moist and tender inside with a bold spicy char on its crust, revealing little tiny edible bones inside, leading me to believe that it was rattlesnake, and for another diner guinea pig.  It was a juicy cut of meat, very light with no gaminess or heaviness- like chicken, perhaps alligator- paired with Zarate’s aji amarillo salsa, a creamy huancaina rustica so full of flavor and vigor, paired with a brightly acidic beet salad. 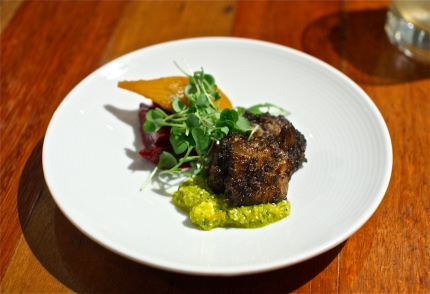 Hint: Dark rich braised meat with an intense bold flavor, a hint of iron within the tender fibers that succumbed effortlessly to the fork, its intensity balanced by the tart onion and cilantro topping, perched on a creamy barley risotto that had a distinct delightful give to its texture.  It tasted and felt like braised oxtail but that would’ve make it too easy for a mystery meat dinner.  On the other side of the plate, Zarate served a crostini of similar dark moist meat mixed with spicy chorizo and topped with scallions.  Were they different cuts of the same animal, or two completely different mystery meats?  The servers would only smirk and shrug their shoulders to such inquiries, refusing to spill the beans until the menu reveal.

Hint: Finally, a recognizable form of tubular connective tissue, cuts of obvious intestine braised to exquisite tenderness, marinated in anticucho sauce and seared ever so slightly to seal in those wonderful spicy and acidic flavors into each bite.  The surprising showstopper of this course was the potatoes, a juxtaposition of crispy crunchy thick potato skin to the soft, moist and buttery flesh within, dressed with a rocoto sauce so spicy that it brought me to tears- tears of joy.

Hint: There is no mistaking a good cut of offal, and the distinct pentagonal lattice of honeycomb tripe in the homey stew was an easily solved mystery for this detective.  A touch of turmeric gave this hearty potato and tripe stew a beautiful golden hue and an earthy aroma, warming every cell in my body with each satisfying bite.  Zarate must have braised the tripe all day, for each cut was as tender as the potatoes, simply melting in my mouth with the ease of butter.  That evening’s cau-cau was dressed with jalapeño salsa and cumin yogurt, but I much prefer the traditional preparation of piquant chimichurri that Zarate has done before.

Hint: As an offal aficionado, course 5 was another easy mystery for this private investigator to solve.  Spongy dark iron-rich cuts of meat with small hollow airways couldn’t be anything other than beef lung, prepared in a comforting stew with tender potatoes and giant kernels of Peruvian mote (corn).  On this particularly chilly evening, this nourishing and wholesome stew was a most welcome dish to savor, down to the very last morsel of lung.

Hint: Although Zarate is famous for his anticuchos, ceviches and arroz con pollo, I have always loved his desserts, and this was no exception.  Thick tender cuts of stewed apples and quince in a vivid purple glaze were spooned over a creamy rice pudding with a heavy dusting of cinnamon on top.  It tasted like chica morada, a beverage staple on Mo-Chica’s menu made from purple corn (maiz morada), and we soon discovered that this mazamorra morada dessert was made from the same ingredient.  Just as I was relishing this beautiful dessert, something bitter, intensely sour and splintery got caught between my teeth.  It was an inch long sliver of fine dark brown fibers.  It was an insect leg.

A mystery meat dinner themed around exotic animal meats and unorthodox cuts of offal may be off-putting for some, but with Chef Zarate as its chef and host, it was exactly the reason why I rearranged my work schedule on that Sunday evening to make it a priority.  Zarate is an experienced chef with these proteins and knows how to work his magic with these exotic flavor profiles, using bold Peruvian spices and salsas to brighten each dish.  The huancaina rustica that augmented the chicken, the rustic anticucho sauce seared onto the choncholin and the satisfying liquid of stewed cau-cau at this Mystery Meat Dinner made for my favorite meal by Chef Zarate to date.  The choncholin, in particular, swept me off my feet with its smokey flavors and beautifully prepared potatoes.

Now, suddenly, I was plagued with a bigger mystery- ‘Will I ever see these dishes again?’ You must put these on the menu at Picca, I demanded, to which Zarate hinted, with a knowing smile, that these may make a regular appearance on the menu at his upcoming new restaurant, Mo-Chica on Seven.  With that final mystery solved, all was well again in the land of Picca. 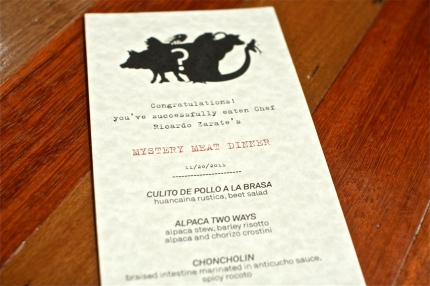 Random trivia: According to local myth, once you try chapulines in Oaxaca, you will never leave.  This probably means that once you sample Oaxaca’s extraordinary cuisine, then you take a piece of Oaxaca with you and you will return again.