Pub grub has come a long way from pork scratchings and pickled eggs when pubs, or public houses, functioned as drinking establishments and inns for the working class in Great Britain.  It wasn’t until the 1950’s that pub owners started offering hearty food with their ales, with what’s now considered to be quintessential pub food items like fish and chips, shepherd’s pie and pasties.  Pubs are still casual establishments for friends who want to socialize over a few pints and bites, but more interest is being placed on quality meals to chow down on.  Now we have a quickly flourishing movement of gastropubs, a term coined in 1991 by the owners of The Eagle Pub in London that combines the essence of pubs and gastronomy to emphasize gourmet delicacies.  While pub purists argue that gastropubs kill the distinct rustic character of traditional pubs, the majority of Angelenos are welcoming this movement with open arms and empty bellies- and how ironic, given that this is a city where drinking usually means drinking and driving.

Gastropubs have a characteristic cozy and comfortable vibe with simple furnishings of banquettes, tables and stools so that the food and brews can take center stage.  For those who love beer, it’s a dream come true as gastropubs offer obscure selections with unique names that will even pique the interest of non-drinking patrons.  Siamese Twin, Damnation, Arrogant Bastard, Snake Bite, Hair of the Dog, Dead Guy and Raging Bitch?  They sound like the latest up and coming bands to debut at the Viper Room, but they’re all local and foreign beers that can only be found at these specialty establishments.  I for one tend to gravitate toward these outrageously named brews for the fun factor, as I’m not well versed in the genre of ales and stouts. 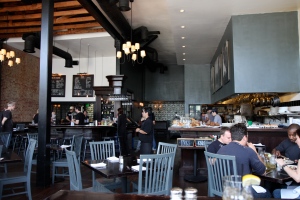 There are many gastropubs in Los Angeles now, from Santa Monica to Downtown, and up north in Hollywood down to the South Bay.  The Village Idiot has remained strong since it opened in early 2007, still drawing in a full crowd at its beautiful open space on a desirable stretch of Melrose Avenue.  Like most gastropubs, they offer wine and non-alcoholic beverages, but there’s nothing better than a cold brewsky to wash down classic British fare like fish and chips and steak and potato pie.  The menu breaks down their food in comical genres like ‘no face’ for vegetables, ‘2 legs’ for poultry, ‘4 legs’ for red meats and ‘no legs’ for fish, perhaps so that even a true village idiot can understand the menu.   Healthy salads, tarts and tartare are on the menu, but it’s predominantly hearty fare like roasted chicken, cornmeal crusted catfish, grilled hanger steak, and crispy pork belly.  The classic fish and chips with malt vinegar dipping sauce is excellent here, with crispy fries and tender white fish with thick batter. 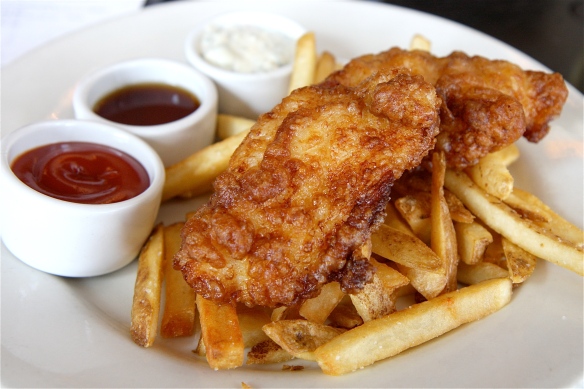 The Village Idiot is open at 9am for breakfast on the weekends, so hungry village blokes can indulge in a full English breakfast of bangers and ham with beans on toast, roasted tomato, mushrooms, and fried egg.

Even though it’s a gastropub, it’s a gastropub in America after all, so American classics with a twist like the juicy pub burger with a marvelous balsamic onion relish can be paired with your pint of hefeweizen. 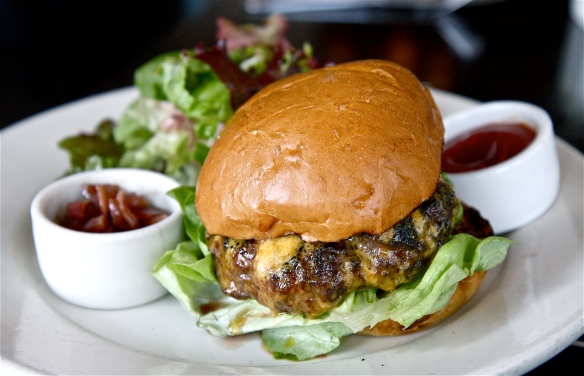 On my last visit to this gastropub, I had one of the daily specials, a house cured pastrami sandwich on toasted white bread with whole grain mustard that was to die for.  The succulent pastrami sliced paper thin was bursting with fatty juices and peppery spices, and it ranked right up there with my favorites from Clementine‘s and Langer’s.

The most uncharacteristically gastropub feature of this establishment is their fairly impressive dessert menu.  Pumpkin pie crème brûlée, chocolate cinnamon bread pudding, and banana treacle tart at a pub?  It’s a wonderful deviation from tradition, and if purists want to scorn at me for patronizing and calling this place a gastropub, then I’ll just shrug my shoulders and enjoy my peach rhubarb tart with cinnamon ice cream.

A notable contender on the gastropub scene is Wurstküche, housed in a large warehouse in a dark and quiet area of Downtown LA near Little Tokyo.  For those who aren’t familiar with the area, it may be difficult to find this spot, but once you open the small entrance door, you’ll be hit with a sonic boom from the lively crowds that squeeze into the long communal tables and benches.  In a smart and delicious move, Wurstküche has carved out a niche for itself by specializing in sausages and wursts to accompany their predominantly Belgian and German beer selections.  With intriguing drinks like sarsaparilla soda, elderflower soda, and botanical brew of dandelion and burdock, even the curious non-drinker gourmands will want to flock here.

If you can first nab a seat at this perpetually packed place, then the next step is to go around to the back to order any one of their sausages, divided into Classics, Gourmet, and Exotic.  Classics include bratwurst, bockwurst and hot Italian, with 3 vegetarian options of Italian, smoked apple sage and Mexican chipotle.  The classic bratwurst, a pork based sausage with hints of nutmeg and coriander, is a must try before you venture into the gourmets and exotics.  The chicken and turkey based Mango Jalapeño with a generous heap of caramelized onions offers an adventure into the sweet and spicy.

Other gourmet selections include Chicken Apple & Spices, Sun Dried Tomato & Mozzarella, Green Chillies & Cilantro, Filipino Marharlika and Kielbasa.  All are served on their freshly baked buns and can be garnished with sauerkraut, onions, sweet peppers or spicy peppers.  The exotics delve into rare meats like buffalo, duck and rabbit, but my absolute favorite at Wurstküche is the rattlesnake and rabbit with jalapeño peppers.  This peppery sausage is surprisingly juicy and tender, pairing well with a glass of Echt Kriekenbier.  The smoked alligator and pork andouille sausage is smokey like a kielbasa but a little too lean and crumbly for my taste.  Double dipped Belgian fries with white truffle oil is a mandatory side order here, though you can choose other dipping sauces like chipotle ketchup, blue cheese walnut and bacon, pesto mayo or thai peanut.

Venturing down south beyond the 105 Freeway is unheard of these days for Angelenos who live on the west side, but venturing even further south below the 91 Freeway and Artesia Boulevard?  Not possible, you’d think, but I heard of a certain gastropub in Redondo Beach that was opened last year by Beechwood owners Nick Roberts and his wife Brooke Williamson, and I made the trek down to check it out.  The glowing pink sign stands out on the otherwise dead and shady neighborhood, and this joint is clearly a local favorite.  Hudson House offers a fairly interesting selection of beers, including the oddities with eccentric names, and the menu is anything but traditional pub food- it centers around the concept of comfort food but with a gourmet twist:  lamb skewers with honey yogurt harissa sauce, chicken meatball sandwich, beer battered cauliflower fritters, brown sugar pork ribs, a pretzel burger and tilapia tacos.

Wheat beer steamed clams with lemon, Thai basil and garlic are actually great, and dipping their toasted bread into the garlic perfumed sauce is highly encouraged.

Dungeness crab deviled eggs flop, much to my disappointment, with absolutely nothing special or tasty about them.

Romaine salad with grilled shrimp is tossed with a light ginger Caesar dressing which almost borders on a Chinese salad flavoring.

Fortunately the juicy and perfectly grilled marinated skirt steak with garlic and truffle cheese fries bring the gastronomy level up a notch to back up Chef Williamson’s impressive bio.  These shoestring fries with the perfect hint of black truffles is quite delectable, and almost worth the whole trip down to the South Bay.

Hudson House represents one end of the extreme on the gastropub spectrum with their non-traditional pub food, and the crispy beer battered Twinkies really says it all.  It’s wonderful that the gastropub movement is permeating into different parts of the city, and that residents of the South Bay have their own new local joints to enjoy, but for now, I’ll stick to my side of the town for pub grub. 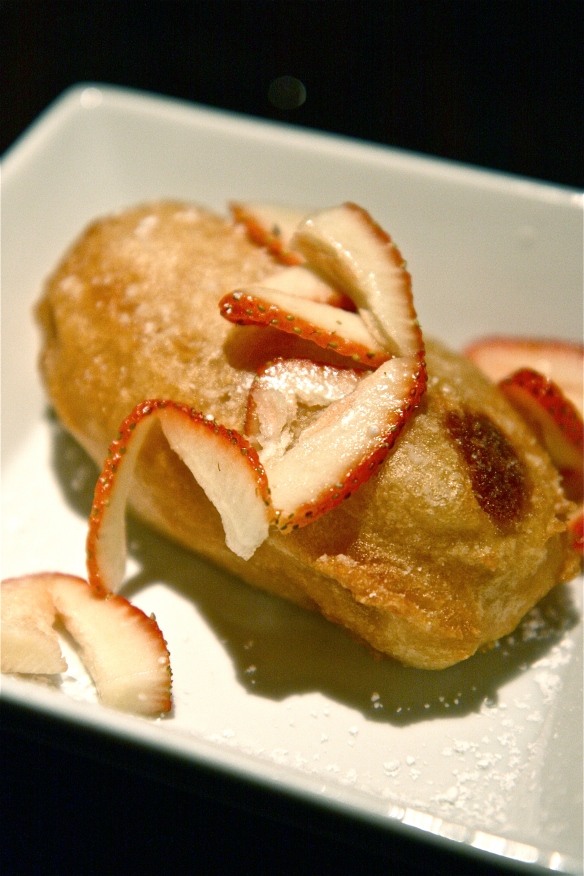 Which brings me back to my neighborhood on the west side where I frequent the lovely outdoor patio of Father’s Office, one of the first and perhaps most famous of all gastropubs in Los Angeles, where you can enjoy 36 brews on tap and nosh down on the prizewinning Office Burger.  The dry aged beef patty cooked medium rare and served on a fluffy French roll with caramelized onions, maytag blue and gruyere cheese, applewood smoked bacon tomato compote and arugula is really all that, and it’s honestly one of my favorite burgers in LA.  With the slightest pressure of my finger pads on the bread as I take a gratifying bite, warm meat juices come pouring out of the tender meat and run down my forearms, but I can’t even be bothered to drop the burger to clean myself up, as the next moment comes too quickly, the moment when the saltiness of the cheese comes rushing in, followed by the sweetness of the caramelized onions and a rapid finish of arugula bitterness.  Even though I’ve eaten about 50 Office Burgers in my lifetime, I don’t have a single photo of it.  From the moment it arrives on the table, it completely bewitches and consumes me.

Father’s Office is famous for their gastronomy, at times offering daily specials of oysters, grilled rabbit or diver scallops.  Beet salad with walnuts, shaved curly beets and garden greens with vinaigrette is a staple on their menu.

Roasted beef bone marrow with a tangy and salty parsley caper garnish is one of the best in the city, alongside Church and State, Mozza and Caché.  Most everything on the food menu at this lively and energetic joint is pretty good, and most of all you just can’t beat al fresco drinking and grubbing on a warm LA evening. 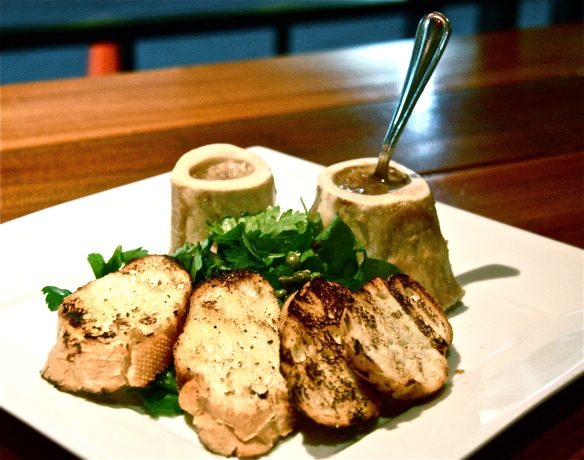 From classical British style to contemporary American twists, gastropubs are popping up everywhere in Los Angeles, consistently brimming with customers as if there still weren’t enough gastropubs around town.  In this past year new places like District, The Lab, Waterloo and City, Laurel Tavern and Boho have opened up in addition to the Gastrobus food truck to join the ranks of Ford’s Filling Station and Westside Tavern.  The secret to their popularity is perhaps the accessibility and informality in this city that’s equally inundated with fine dining establishments where reservations may be difficult to land and a dinner outing means a 3 hour commitment with jacket and tie.  Sometimes you just want to pop in for a quick drink with friends sans reservations, but you don’t want to compromise on savory food.  These are the times when the familiarity of beer and sausages at a gastropub present the perfect combination of gourmet and comfort.

Random trivia:  Did you know that a beer bottle collector is called a labeorphilist?  A beer mat collector is a tegestologist.