In case you haven’t noticed, I love French food- real authentic hearty French food that sings to my heart, purrs in my belly and misshapens my thighs.  Especially after returning from a wonderful trip to France a few months ago, I’ve been daydreaming about re-living, even if but for a fleeting moment, that experience of being in a real French bistro.  I love the bustle of a bistro, the long banquettes and crowded tables, the carafes of wine that go with my escargots and foie gras paté, the old school waiters who aren’t afraid to tell you what to order, the gentlemen drinking their Cognac and the madames enjoying their cafe on the patio as they readjust their stylish scarves to keep their neck warm from the cold Parisian chill.  And I recently had such an experience in the heart of Culver City at Le Saint Amour.

Owners Florence and Bruno Herve-Commereuc closed their downtown restaurant, Angelique Café, and reopened in Culver City a few months ago.  The concept of serving homemade French charcuterie (made by Bruno himself) and authentic French fare is still unchanged, although the space is magnificently upgraded.  This magical brasserie has the power to transport you to Paris in an instant.  Am I in Saint-Germain-des-Prés on Rue St. Andrés des Arts?  Or is this in the Marais close to Place des Vosges?  The tall ceilings, tiled floors, long red banquette against the wall, large distressed mirrors on the wall that make the dining room seem larger, small tables narrowly spaced next to one another, specials of the day written in white chalk on the board, large front windows facing the sidewalk framed on the bottom by white lace panels, French waiters scurrying to and from the open kitchen carrying carafes of tap water and plates of mussels…..ah yes, I am in Paris.  The atmosphere is so authentic, that more than half of the customers were also French.  The owner of The Little Door was a few tables down from me, appearing to be very much at home. 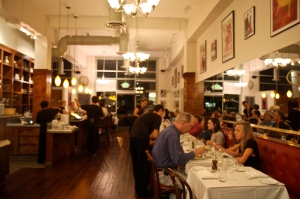 I’ve never had a bad experience in Paris, although the city has a bad reputation of having rude waiters.  For those of you who have this opinion or prejudice, rest assured that Le Saint Amour is quite the opposite.  Florence was a most generous and gracious hostess, all of the waiters were attentive and warm, and nobody made me feel rushed.  Everybody was relaxed and happy to be working there. 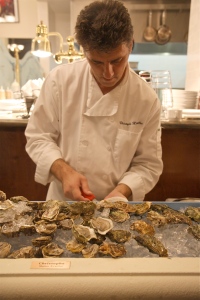 Thursday night is the best night to go, when oyster sommelier or maitre écailler Christophe Happillon is there with his oyster cart in front of the open kitchen with a big friendly smile on his face.  He gently shucks each oyster himself and shares his vast knowledge with all of the customers.  I’ve never met anybody more passionate about oysters than Christophe.  As he lovingly and tenderly held each oyster in his hands, he told us about how the quality of the seaweed bed and water temperature affected the flavors of the bivalves;  how they originated in one ocean but are now farmed in another, altering the brininess and finish of the oysters; why certain shells are round versus flat and why some are blond versus gray. 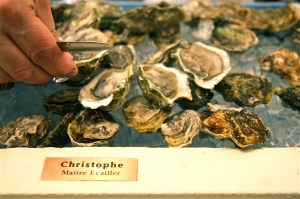 The Carlsbad Lunas with the round and blond shells left an acidic kick in the back of my mouth, and had a stronger aftertaste that was complemented by the shallot vinaigrette.  The Endless Summer oysters from Baja California had a light cucumber finish.  The Fanny Bays, my favorite, had a creamy and rich texture with a light lemongrass finish.  All were perfectly shucked and presented.

When Bruno took our order, he gave us a slight frown.  “You’re not getting the boudin noir?  You have to try it, I made it myself.  Let me bring you some!” 15 minutes later he emerged from the kitchen with a plate of boudin noir, a proud smile on his face.  As he set it down on our table, he also pulled up a chair and watched as I took my first bite and gave him my best genuine O-face.  Ahh, exquisite.  This blood sausage was rich in flavor, bursting with complexity, yet light in texture.  The apple compote was a perfect complement to the dense iron-rich sausage.  This was one of the best boudin noirs that I’ve ever had.

The ris de veau veal sweetbreads with frisée was a bit on the dry side, but nicely prepared with a slightly crispy crust and perfect with the acidity of the capers.

The escargots with garlic and parsley butter were just like what I would expect at a Parisian bistro- succulent, juicy and buttery.  These little succulent treasures were simply divine. 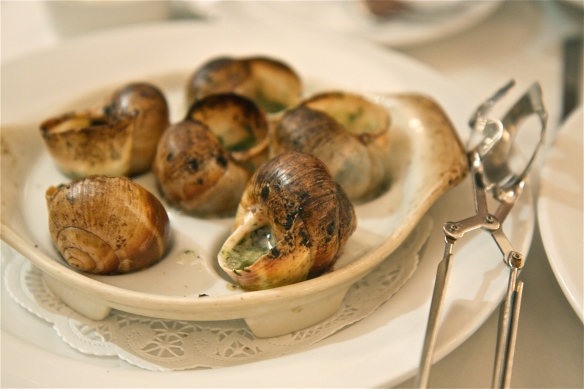 The pied de cochon farci, boneless pig’s feet with tartar sauce, was outstanding.  It came out as a small square object, and as I cut through this pig’s skin pillow, cochon heaven came gushing out like a burst pipe.  I could see tender bits of pig skin, collagen, meat, mushrooms and flavorful jus just begging to be slurped up.  This went beautifully with the tartar sauce and the bitter watercress salad.   A truly amazing dish from start to finish.

The terrine de foie gras de canard ‘maison’, house made duck liver terrine, was out of this world.  It rivals some of the best that I’ve ever had in Burgundy.

En fin, we had the entrecote au poivre, the grilled rib eye steak with pepper sauce and fries.  This perfectly medium-rare grilled steak was amazingly tender and flavorful.  It was refreshing to get a steak grilled just the way I ordered it- it’s actually hard to come by these days.  Grilling meat correctly seems to be a lost art.  The foie gras, boudin noir and steak all went beautifully with a bottle of 2006 Savigny-les-Beaune ‘Les Gollardes’ from Jacques Girardin.

Even the dessert was to die for.  The baba au rhum left me speechless.  It tasted exactly like what I envisioned the most perfect baba au rhum to taste like.  Moist and sweet with a hint of rum, with tender candied fruits that were soft and subtle in flavor.  I couldn’t even get good baba au rhum in France, but here I was in a little heavenly bubble in the middle of Culver City, eating French bistro food that rivaled some of my most memorable meals in authentic Parisian bistros. 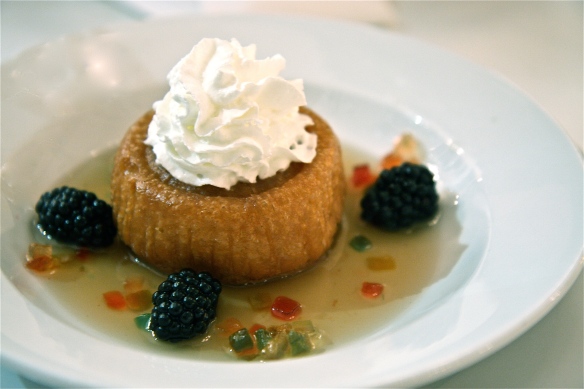 Random trivia: Did you know that boudin noir is made from fresh pig’s blood?  When it’s made in the traditional fashion, it takes several people to perform this task.  When bleeding the pig, one of the forelegs has to be constantly moved around to avoid clots from forming in the blood vessels and thus facilitating drainage.